Dengue fever has become a full-blown epidemic in Guangdong, with the province’s Bureau for Health and Family Planning reporting the number of cases has risen to 23,146. With more people dying from the disease, the government is asking the public to lend a patriotic hand in addressing the epidemic. With six deaths and thousands of new cases being reported every day, it is hard to believe that Dengue fever is preventable, curable, and controllable. Yang Zhicong, deputy head of the Guangzhou Center for Disease Control, said that although the situation appears dire, the Dengue fever epidemic should be under control by the end of October:

Guangzhou and many other regions have recently adopted measures to prevent the proliferation of Dengue Fever and to destroy mosquitoes and their spawning areas. At present, we are making progress.

The progress Yang refers to includes a government “patriotic hygiene campaign” to combat Dengue fever, declaring that every citizen has a duty to help stop the epidemic by eradicating mosquitoes and their spawning pools. 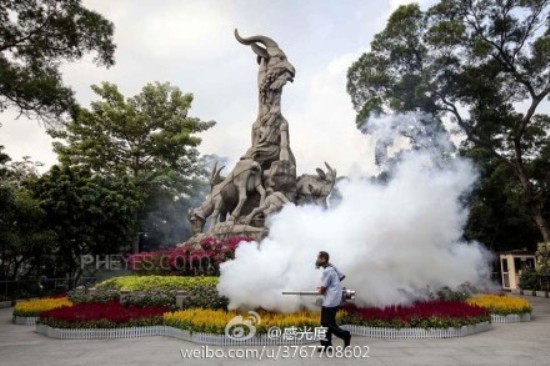 The chemical clouds of smoke have been described as an “anti-mosquito agent” and is being used on a grand scale. While Foshan just launched a city-wide mosquito eradication campaign, Guangzhou has been at it for much longer. Every day, 160 face-mask wearing “eradicating mosquito heroes” in Guangzhou spray 35 kilograms of the mystery agent. 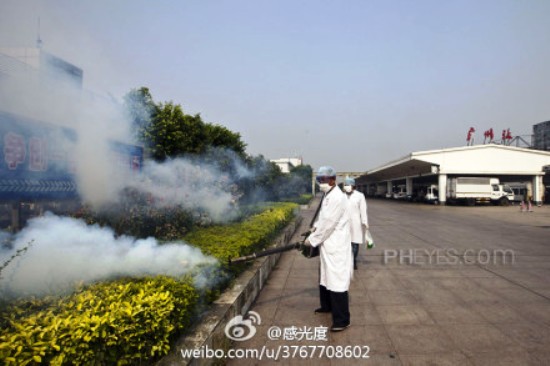 Despite More Dengue Fever Cases, Infection Rate is in Decline

Beijing’s Sky is Clear Today, But Look at How Bad It Got Last Week