Guangzhou is becoming notorious for its Sex & Culture Festival, which washes up on our shores once a year.  There are actually several sex festivals in China, but for some reason the Guangzhou version has become the largest and most famous.

China Daily notes the festival will open in October:

The 10th edition of the festival will host a variety of activities like exhibitions of 100 ancient sexrelics, sexology forums, and lingerie catwalk shows from October 6 to 8, with organizers hopingto attract visitors during the National Day holiday.

That all sounds very cultural and high-minded, but the reality might be a bit different. Alex Hofford, a renowned local photographer, attended the event in 2009 (his excellent photo album from the event is here).  He seemed to indicate there was less “culture” in the Sex & Culture Festival, and a little more of the “sex”:

Ostensibly, the expo is supposed to be about sex education, but somehow over the years it has degenerated into a perv fest. The biggest draw for most fair-goers seemed to be the ‘lingerie show’, where middle-aged men appear to be the main demographic.

As one progressed through the sex education area the items on display got stranger still. Large posters of naked women’s bodies, cropped at the head and the knee. The whole series was on display. Photos of human females. All in a state of undress. From the cradle to the grave. Each snapshot of a human female taken at one decade intervals from birth, the saggy boob poster above being the last in the series. The full series, not seen here, includes large framed posters of material which could be construed, in some circles, (Interpol?), as child porn. Now I’m a huge advocate of press/internet freedom, but I have to draw the line somewhere. I will most definitely not be posting photos of people looking at large photos of naked children here. Then the exhibition got even wierder, as if that was possible.

You can read Hofford’s full take here. (Adam Minter, a freelance reporter based in Shanghai, also blogged about the 2009 show here.)

Regardless of its lewd nature, the event is popular. Organizers say more than 3 million people have attended the festival since it launched in 2003.

Anybody interested in being The Nanfang’s correspondent/photographer for this year’s event?

Our own Danny Lee went to last year’s Sex & Culture Festival, and took the photos below: 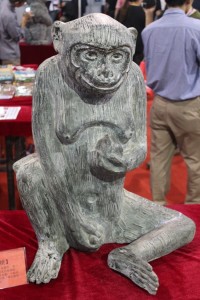