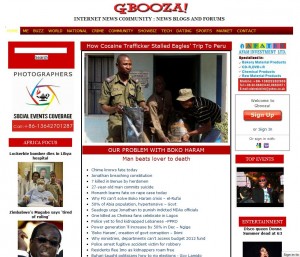 Guangzhou is one of the most diverse cities in China.  While it has its fair share of Caucasian expatriates, it is also home to the largest black community in Asia and it’s not uncommon (in fact, it’s quite common) to see women in full burkas.

The city has a long history of being open to the outside world, even moreso than either Beijing or Shanghai.  As a city far from China’s political centre, it’s a bit more freewheeling and loose.

The African community here has been estimated at between 100,000 and 200,000, but regardless of the figure their impact on the city has been immense.  We have told you before that airlines from Africa are stepping up direct flights between the continent and Guangzhou, while political and economic ties between the two regions strengthen further. Parts of Baiyun and Yuexiu districts have been renamed as “Chocolate City“. So what are the Africans doing here?  Many are involved in textiles and export products back to their home countries.  But one man has taken a different path.  Spartan Arinze was recently profiled by Public Radio International because he has launched a social networking site aimed at Africans living in China.

Arinze arrived in Guangzhou from Nigeria 10 years ago in search of the Chinese equivalent of the “American dream”.  He launched his social networking site, Gbooza!, after being inspired by reading the Huffington Post.  He says knew he wanted to do something to serve the legions of Africans in Guangzhou, and the many others spread out throughout China:

The site is part social network, part news aggregator and all focused on the Nigerian community in China.

Gbooza is no Facebook yet. The site has about 2,000 members and gets around 5,000 pageviews a day. But Arinze is still dreaming big. His next plan: making gbooza.com the number one social news network in Africa.

Arinze called the decision to launch a social network the “biggest risk of my life”.

While Arinze is based in Guangzhou, the site is much more global in nature.  It features an Events section, a trading corner, and plenty of news related to Africa (with a particular penchant for grizzly crime stories).  News can be filtered by continent.

Arinze says he has big plans for Gbooza!

The site has about 2,000 members and gets around 5000 page views a day. But Arinze is still dreaming big. His next plan: making gbooza.com the number one social news network in Africa.