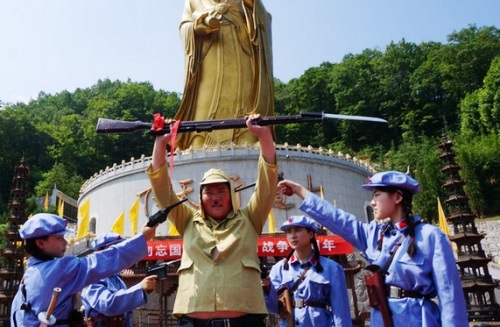 Tensions between China and Japan continue to run high thanks to the dispute over the Senkaku/Dioayu islands, Japanese Prime Minister Shinzo Abe’s visit to the Yasukuni Shrine, and Japan’s latest attempt to revise its anti-war constitution to give it more freedom to engage in military activities when its allies are under attack. To express their distaste for all things Japanese, women dressed as Chinese soldiers staged a skit on July 7, which marked the 77th anniversary of the Marco Polo Bridge incident, which kicked off Japan’s invasion of China.

Women wielded their weapons at a pudgy-looking man playing a Japanese solider in Laojun Mountain in Henan Province. The Japanese soldier happened to have a toothbrush moustache inconspicuously placed on top of his upper lip. This facial feature has become a trademark for any Japanese soldier depicted in China’s patriotic anti-Japanese films and TV dramas.

The Japanese stand-in knelt in front of a giant golden statue of Lao Zi, founder of Taoism, and confessed his crimes that included murder, arson, poisoning, and rape. He was also seen “learning to write the Chinese character ren (meaning “human” in English)”, the Guangming reported. The character ren (人) only consists of two strokes, and the newspaper went on to say “it contains profound wisdom of how to be a human”, hinting that the Japanese seem to have failed to comprehend it.

The central government is promoting other campaigns to mark the anniversary, and Xi Jinping has commemorated the event. Dancing grannies in Beijing have even incorporated Japanese-bashing into their dance routines.

Most online comments criticized the Henan skit. It was mainly labelled as a ludicrous “travesty“. One Weibo user wrote: “Somewhere, (people) are using their own countrymen to portray a ‘Japanese bastard’ in a movie-style to promote anti-Japanese education. When commemoration becomes a travesty, it is a real distortion of that grim episode of history”.

Guangzhou braces for the largest anti-Japan protest yet

Even when relations between Japan and China are cordial, September 18 is a sensitive date.  In 1931, Japan staged the Mukden Incident as a pretext to invade Manchuria, and later the rest of China, on September 18.  Each year, China marks the event as another in a long line of humiliations by great powers.

The problem is, relations between Japan and China aren’t exactly cordial this year. Over the past several days, thousands of people have taken to the streets in Guangzhou, Shenzhen, Zhuhai, Dongguan, and across China to protest Japan’s claims to the Diaoyu/Senkaku islands. In one case in Shenzhen, the windows of Japanese businesses were smashed and police resorted to pepper spray and water cannons to clear the crowds.  That was on Sunday, and today is the anniversary of the Mukden Incident.

Protests have already started outside the embassy in Beijing today, and Guangzhou has set up barriers in Tianhe to handle an influx of protesters.  The photos below are from last night and this morning in Tianhe.

We’ll keep you updated on events throughout the day.  If you happen to be Japanese or have Japanese friends, best warn them to steer clear of public gatherings in the PRD today. 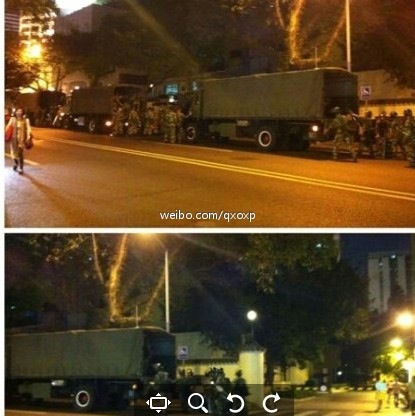 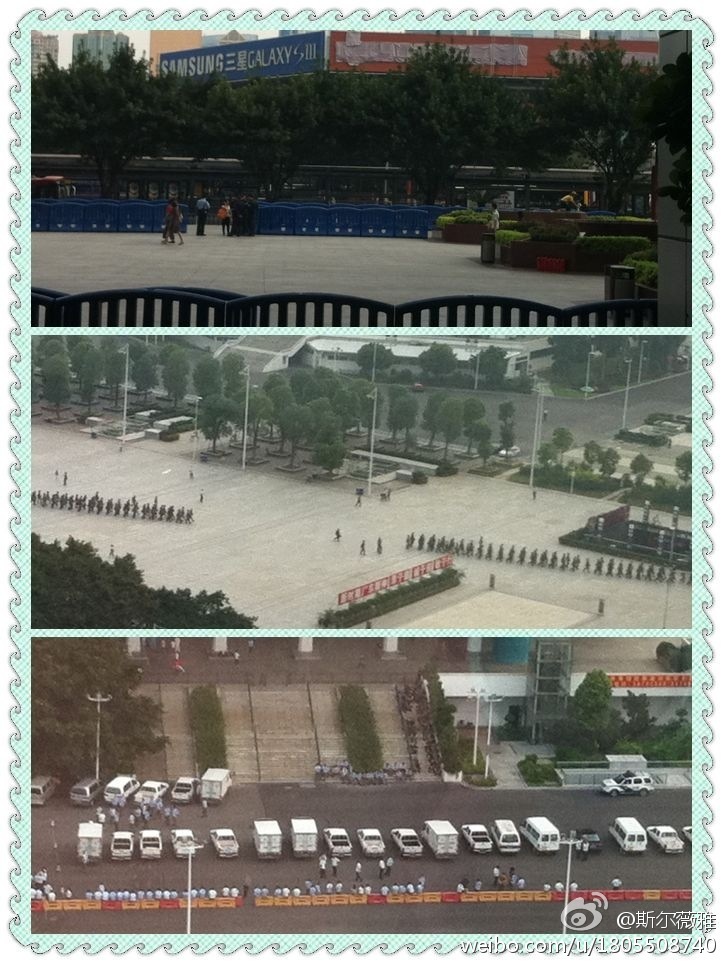