Meet the New Drug on the Streets of Guangzhou: Khat, the “Arabian Tea” 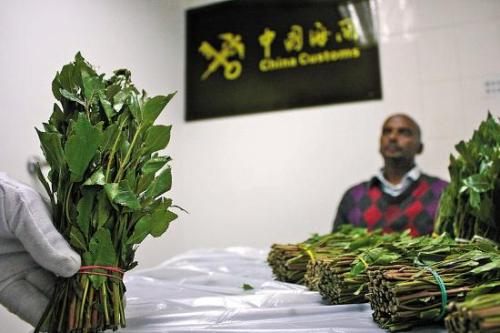 The hottest drug on the streets of Guangzhou right has gotten a lot of attention from police, officials, media and parents. Called khat, or by its colloquial names “Arabian Tea” or “Bushman’s Tea“, police are warning the public that it is the equivalent to heroin and its euphoria high will last for two days.

An exhibit called “Reject Drugs, Cherish Life” in Yuexiu District gives the lowdown on the heinous drug that first infiltrated China’s last year through the criminal underground. The exhibit tells us the drug can be consumed by chewing upon the fresh leaves of the catha edulis plant, by drying its leaves and consuming it as a tea, or by grinding the dried leaves into a powder which is then dissolved into water for drinking.

The exhibit goes on to say khat is an extremely addictive drug that produces excitement and hallucinations in its user. Originally from Africa and the Arabian Peninsula, the drug has recently been classified as a nationally-prohibited drug in China that is quickly proliferating in part to its cheap street price: 500 yuan for 500 grams of fresh khat leaves, and 200 yuan for 500 grams of dried khat leaves.

The other reason that has helped spread this drug in China is that khat is so hard to detect. In its form as fresh cut leaves, khat has an appearance exactly like that of amaranth greens/Chinese spinach. In its dried form, khat looks just like the dried green tea leaves that every average Chinese drinks from a huge flask full of hot water every day.

An unidentified worker with the “Reject Drugs, Cherish Life” revealed the depravity of the khat drug ring that plagues Guangzhou through one given example:

“Last year, police uncovered a major khat smuggling ring and its users on Guangyuan Road. Throughout the building lived people of African nationality along with massive amounts of khat. There was an integrated chain of service and use between the drug dealers and users. And, police put an end to this drug hive.”

Community leaders are very concerned about khat’s effect upon the impressionable youth of China. An initiative to warn children about the dangers of khat called “The Little Red Bell“ have been making the rounds in China. 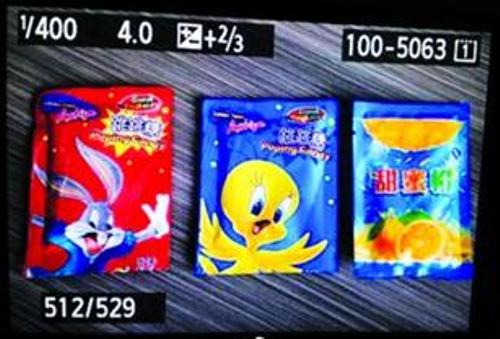 The concern for the welfare of children intensified recently after police in Jiujiang, Jiangxi Province made a startling discovery on April 23. At a drug arrest at a hotel, police found khat packaged in 60 orange drink powder packages with cartoon packaging. The drug is said to dissolve in water, and taste and smell just the same as any other refreshing drink a child would have.

Well, it’s not Krokodil, but to Chinese, it might as well be.

Khat invites controversial opinions from different people. While the use of khat is considered a way of life for generations of people in Somalia, Ethiopia and Yemen, khat is considered a prohibited substance in countries such as the United States, and was only recently banned in the UK on July 2013. The global spread of khat has to do with the migrations of Africans that use it.

The World Health Organization does not consider khat to be seriously addictive, and has been likened by some “to be like coffee“. However, HuffPo alleges that every monetary aspect of the khat market supports the al-Shabaab terrorist group in Somalia.

Shenzhen is known as a migrant city, or “Overnight City”, as told by Peter Hessler in his excellent book Oracle Bones. In fact, many parts of Oracle Bones are situated in Shenzhen, and describe the challenges migrants face when they leave their villages, which are structured heavily by families, to become nameless, faceless factory workers in a large, cosmopolitan city.

It’s not surprising then that many turn to substance abuse. The China Daily recently ran a feature article looking at the drug problem in Shenzhen. It’s worth a read for anybody who’s interested in the city. Here is an excerpt:

The typical drug abuser in Shenzhen is a 32-year-old man, according to a survey released by the Shenzhen drug administration.

“Last year, we collected 4,899 questionnaires from the city’s three drug rehabilitation centers, a discipline center and five community clinics that give out methadone, which is used as a pain reliever and as part of drug addiction detoxification. We found more than 92.8 percent of drug abusers were aged from 20 to 45,” said Liu Xiaoyu from the Shenzhen drug administration, who is in charge of the survey.

She said the survey found about 91 percent of Shenzhen’s drug abusers are male and their average age is 31.8, and that 75 percent of addicts used traditional drugs such as heroin, opium, marijuana and cocaine.

“However, that doesn’t mean people prefer traditional drugs to the synthetic drugs, because many of them are taking both,” said Liu.

Wu Zekai, a 29-year-old social worker at Futian district’s methadone clinic, said although more male addicts came to the clinic, the ratio between male and female addicts is probably closer to 80 percent and 20 percent, rather than 91 percent and 9 percent.

“More women go for synthetic drugs like methamphetamine and ecstasy,” he said.

“I think there are many female drug addicts that haven’t been found yet,” said Wang Yongjin, who struggled with his drug addiction for 15 years.

The ex-drug addict said more female drug abusers can be found in entertainment venues rather than rehabilitation centers or discipline centers.

According to figures provided by the Shenzhen Anti-drug Committee, 9,136 people were caught taking drugs last year and more than 93.7 percent of them came from outside Shenzhen.

“Only 577 were local,” said Luo Qing from the committee.

With so many migrants, that last stat is not surprising. You can read the full article here.