This is a great story – a fable, if you will – told entirely in Weibo posts.

Weibo is a place where people like to have fun. The Shenzhen Traffic Police are just like you and me: they share their love of GIFs while trying to admonish the dangerous activities they depict, and reply to funny questions with funny answers.

Weibo user MrCharlesChen is a also a guy who likes fun. And that’s what he was having when he posted a picture to Weibo at midnight on May 25 of himself driving with a beer can in his hand. He asked: 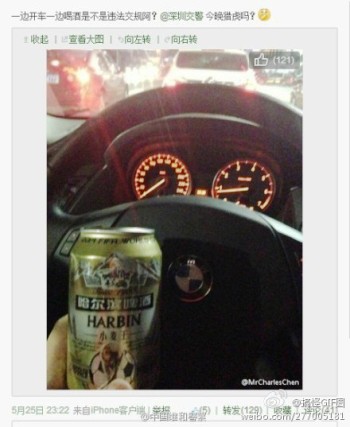 MrCharlesChen
Is drinking and driving at the same time against the law? @Shenzhen Traffic Police Have you caught any “tigers” tonight? [coylaughing.emo]

Yes. The account he was asking was the Shenzhen Traffic Police.

And while the Shenzhen Traffic Police has a history of joking around, they didn’t do so this time. Instead, they sent a short, terse message:

Shenzhen Traffic Police:
Put the beer down, and drive safely!

Such a reply didn’t deter MrCharlesChen, who posted the reply: 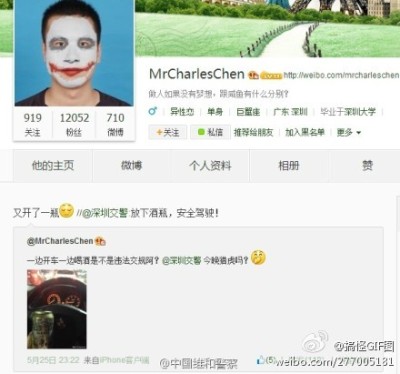 Netizens got in on the fun at this point. They combed through MrCharlesChen’s Weibo account, and found the following gem in his photo album from March 19, 2013: 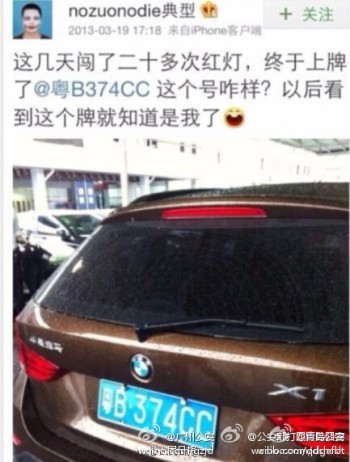 MrCharlesChen:
These past few days, I ran through about twenty red lights before I was finally caught @粤B374CC How’s this license for you? The next time you see this license plate, you’ll know it’s me [openmouthlaughing.emo]

Another photo found in MrCharlesChen’s album showed he was unrepentant towards his lawnessness by posting a screenshot of the driving violations he had incurred: 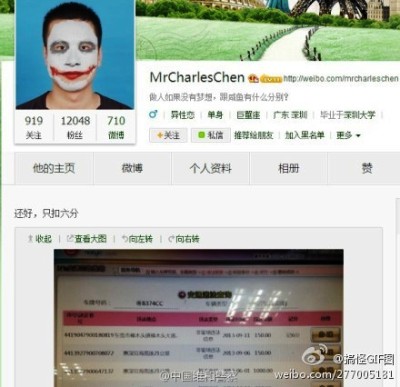 CharlesChen:
That’s fine, I still have six points (left on my license)

Sensing a change of merriment, MrCharlesChen changed his username to the very apt “no zuo no die (classic)“, and deleted all the content in his Weibo account. Unperturbed, the Shenzhen traffic police said that they were going to find him all the same: 搞怪GIF图：
This guy changed his (username)

深圳交警:
(Despite) changing a username, we still have to investigate.

MrCharlesChen finally signaled that he had enough fun: 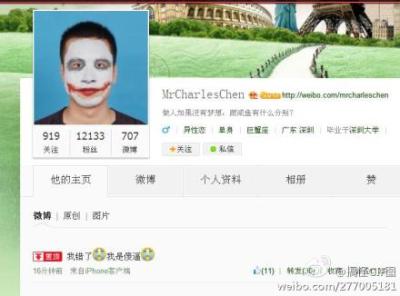 However, the fun continued for netizens and police as they collaborated to find more information on MrCharlesChen: 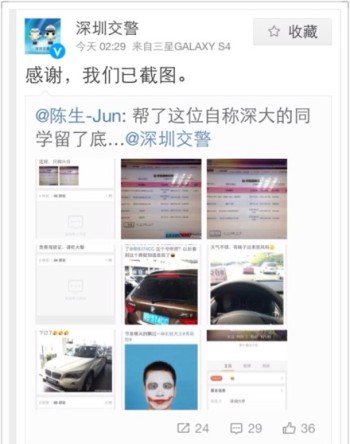 Mr Chen-Jun:
Going to help out this so-called fellow classmate of Shenzhen University to remain at the back of the class…

Shenzhen Traffic Police (reply):
Thank you very much (for your contributions), we have already made screenshots.

The Shenzhen Traffic Police found that long list of traffic violations MrCharlesChen had boasted about: Shenzhen police put a stop to all the fun on May 26 by issuing a demand to MrCharlesChen to surrender himself at a traffic police station. And they did it by sending him a Weibo post:

(Car with license plate 粤B374CC has made 16 driving violations) Through an investigation, it has been determined that Weibo user @MrCharlesChen (who has changed his username many times, and deleted his entire account) is a suspect wanted in connection with driving violations related to a BMW X1 vehicle with the license plate 粤B374CC that was first registered on March 5, 2013. To date, this vehicle has accrued a total of 16 violations, ten of which occurred in Shenzhen (nine counts of illegal stopping, one time for speeding) and six other violations occurring out of province. At present, ten points have been deducted from your license, leaving only six points left. According to traffic regulations, please hand over your car for confiscation and inspection.

But netizens would do one better and perform a human flesh search that turned up MrCharlesChen’s real name, work unit, picture, and residential address. Shenzhen Traffic police were very amenable with their ultimatum by issuing helpful reminders:

Shenzhen Traffic Police:
If you do not arrive by 2pm, we will come to your residence. If there is a need, we will ask for the help of the “Uncles” in CID (Criminal Investigation Department).

And with the clock ticking:

MrCharlesChen finally did turn himself in. And, the police celebrated it with everyone online by posting his arrest on Weibo: 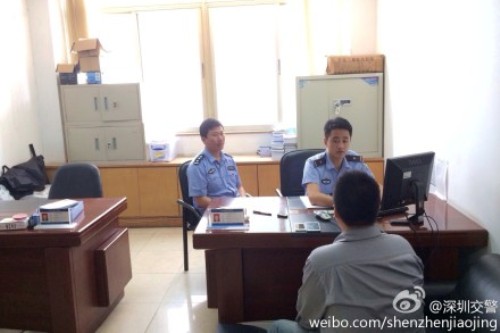 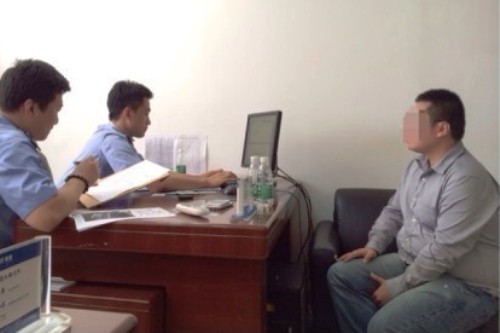 And then they posted all of his personal credentials online: 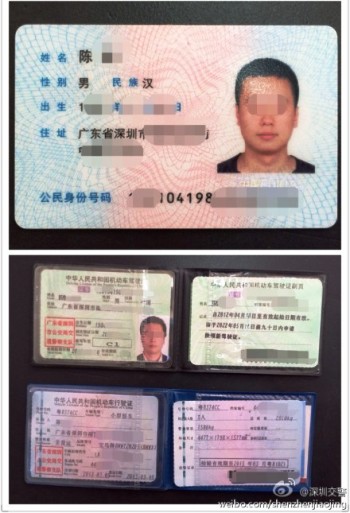 Of course, they censored anything personal about him but that was irrelevant, as his identity was already made public by the human flesh search.

Later that day, MrCharlesChen was very ponderous with his first post to Weibo ever since deleting his entire Weibo account: 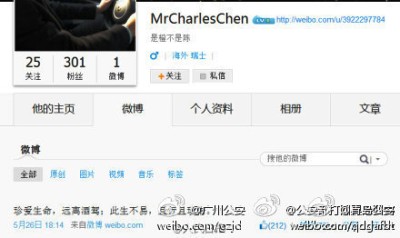 MrCharlesChen:
Cherish life, don’t drink and drive. Living is not easy, cherish what you have when you’ve got it.

Yes, it would be much more poetic if he didn’t plagarize most of it. Outside in the parking lot, Shehzhen Traffic Police finally saw the car that they’d only seen online: But upon opening the trunk of the car, they found yet another familiar sight: 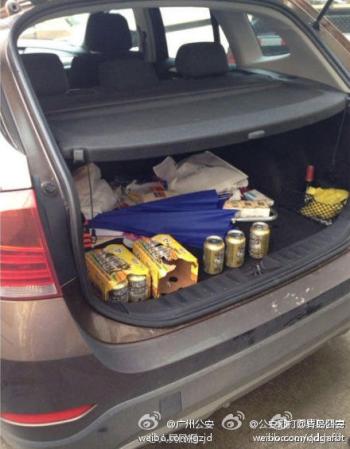 That’s right, MrCharlesChen had driven to the police station to surrender himself and his car with two cases of beer in the back. He does like that Harbin beer, we see.

The moral would be very clear at this part of the story, except that it isn’t over.

With all of this having happened back in the distant past, meaning Monday of this week, some netizens still had lingering doubts. So one user recently posted this question to Shenzhen Traffic Police: 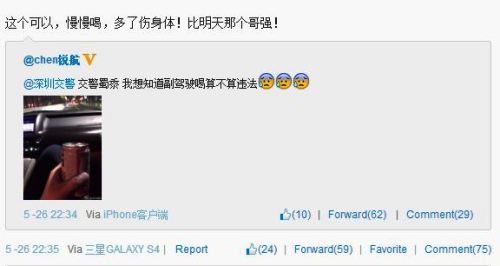 chenruihang:
“Uncle” traffic police, I want to know if drinking (soda pop) in the passenger seat is against the law

Shenzhen Traffic Police:
That’s fine, enjoy your drink. (Just remember,) too much will adversely impact your health! Just remember to do better than that brother from tomorrow. 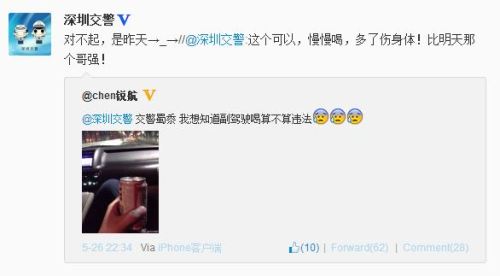 So while this may have been a very simple moral of “stupid is as stupid does”, the true moral of this fable is Weibo itself: no one ever forgets anything online. Not your hideous shame, your regretful mistakes, and not any one of your speiling mistakes.