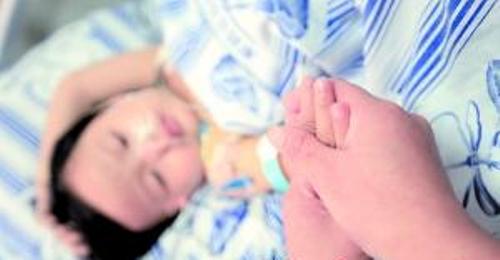 After being saved from certain death, little Yaoyao is now on track towards huge savings.

While doctors call the recovery of three year-old Yaoyao nothing short of “miraculous” after the girl tumbled out of a Guangzhou seventh-floor apartment, what remains truly heavenly is the girl’s saving of her parents from a huge debt incurred by massive hospital bills.

Yaoyao’s rate of recovery has been exceptionally fast for such a serious incident. After the accident occurred on April 19, Yaoyao regained consciousness a day later; three days after that on April 22, Yaoyao was moved from ICU to a regular ward at which time she was able to open her eyes and move her hands and feet; then, Yaoyao continued to astonish when she said her first words yesterday: ”Mama, it hurts”. Yaoyao’s speedy recovery is just as well. Yaoyao father Mr Xie emphasized how expensive it was to treat his daughter. Xie doesn’t have the money to pay her daily medical treatment that averages 5,000-6,000 yuan a day and is expected to reach 100K yuan before she fully recovers.

The three year-old girl had fallen from a Lilian Street apartment in Cangtou Village, Huangpu District, the Guangzhou Daily reports. No one was home at the time of the accident; her father had left the house after putting Yaoyao to bed. The window to her bedroom was closed but not locked, and the apartment is not equipped with an anti-burglar cage from which other falling children hang by their heads and is responsible for trapping families inside their own homes during a fire.

A few factors may have helped Yaoyao not break the bank and buy the farm. Seeing many broken tree branches at the scene, Xie thinks that a tree located below the apartment may have broken the girl’s fall. As well, doctor’s praise young children in their high resiliency towards injury, but stopped short of recommending falls be performed at as young an age as possible.

And hey, if it seem disingenuous to value Yaoyao’s quick recovery for the money she will save in hospital bills over her own life, well, at least it’s not to be as disingenuous as fans of a hit TV show expressing outrage at a fictional rape performed by their favorite characters that are all guilty of performing atrocities four seasons long.