By late next year, you’ll be able to take Guangzhou’s Metro Line 4 to hop on the high-speed rail.

After the transportation lines are connected and Qingsheng Station is finished, a trip on Guangzhou’s Metro Line 4 from University Town to the high-speed rail will take only half an hour, reports Guangzhou Daily.

Qingsheng Station on Line 4 is currently Guangzhou’s first operational metro station to undergo the necessary modifications, and is expected to be fully operational by December 2015. The station will be the second high-speed rail interchange, after Guangzhou South Railway Station.

The fare from Qingsheng Station to Shenzhen will be RMB 49.5, and the trip is expected to take only 28 minutes under optimal conditions.

There are currently 13 high-speed trains traveling between Guangzhou South Railway station and Shenzhen. The plans for an inter-provincial high-speed rail connecting Guangzhou, Shenzhen and Hong Kong were recently delayed.

Photographs have been published by The Daily Sunshine of the construction site of Shenzhen Futian Train Station, which will be the country’s first underground transport hub. It will be part of the Guangzhou-Shenzhen-Hong Kong high speed railway, which will be completed in 2015. The complex will also include a 100-meter long bus station

The station will be located at the intersection between Shennan Avenue and Yitian Road, and will be 270,000 square meters (that is 192 football fields) in size. Passengers will be able to use the station’s transfer hall to walk to the Futian and Civic Centre subway stations, which were completed ahead of the Universiade in 2011. 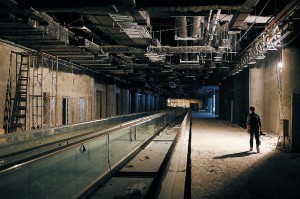 Approximately 1,500 people are working on the construction. Underground construction is especially difficult due to problems such as lighting and ventilation for workers. 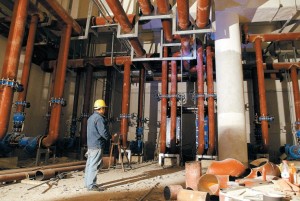 The city is particularly proud of its use of new and green technology such as LED lighting in the project.