A trio of daredevils have climbed to the very top of a Hong Kong skyscraper in order to take a self-described “world’s most dangerous selfie”, reports the New York Daily News.

The group includes Daniel Lau, Andrew Tso and A.S., and somehow found its way to the top of the highest spire of The Centre in Sheung Wan, Hong Kong’s fifth tallest building at 346 meters tall.

Lau used a “selfie stick” to capture a view of Hong Kong using a wide-angle lens that is as refreshing as it is unsettling.

There’s no self-commentary in the video, so there’s no way to confirm if the use of bananas is some kind of postmodernist symbol signifying a slippery footing at the apex of a capitalist metropolis.

Taking personal videos while climbing tall buildings and objects has been a popular internet phenomenon in Russia, and is a feat recently replicated on the still unfinished Shanghai Tower.

The new Peace Finance Center, which is still under construction, is now the tallest building in Shenzhen, at 448.3 meters high. The Peace Finance Center has taken the honor away from the previous title holder, the KingKey Financial Center, whose one hundred floors measures 441.8 meters in height.

The main structure of the Peace Finance Building will stand at 588 meters tall, but with a planned attachment to be added later on, the complete height will be 660 meters.

The Peace Finance Center will have 115 floors with another five stories underground. It is slated to be completed in 2016. 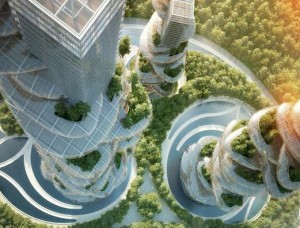 Architects are often pushing the boundaries of vision and scope with their ideas, but the profession has outdone itself on this occasion.

The designers at Vincent Callebaut believe they have an answer to China’s mass urban migration, polluting cities and resource-hungry people.

Their Shenzhen-inspired “Asian Cairns” vision is aptly named the “farmscraper”.

China’s mass-migration has led to a tipping point as the number of city-dwellers has now exceeded that of the rural population and that is expected to rise to 800 million people by 2020.

Vincent Callebaut Architecte say Shenzhen is a microcosm, adding the city has outgrown its resources.  Their solution is more blocks of towers, but not as we know it.

From the pictures on their website, they propose a “green, dense, smart city connected by the TIC (total integrated communication) and eco-designed from biotechnologies.” 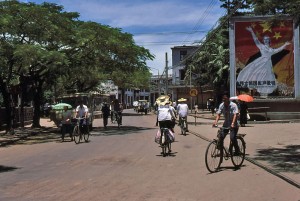 Shenzhen may have transformed more than any other city in China since Deng Xiaoping launched reform and opening more than 30 years ago.  Back then, Shenzhen was mostly farmland, while today it’s filled with skyscrapers and high-rise apartments.

This latest concept can only be politely described as asthetically bonkers, with an almost out-of-this world vision, presenting a mid-air house within a garden made up of six self-sufficient, self-sustaining towers. 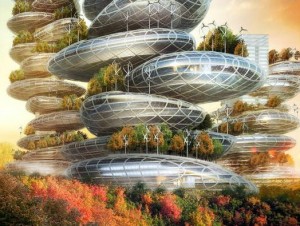 The numerous layers of pebble-shaped floors give it the scale of a supersize Stonehenge.

They call it the “farmscraper.” We’d like to think of this as a skyforest.