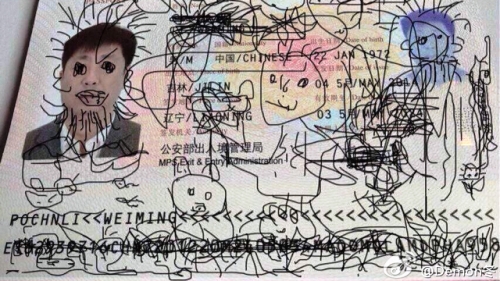 One particular Chinese social media story has gotten a lot of attention lately from news outlets worldwide: a Chinese national gets stuck in South Korea because his four year-old son doodled all over his passport.

Those children! While we can’t stay mad at such innocent precociousness, there’s a valuable lesson to be learned here in trying to better take care of one’s own passport. Why can’t more news stories have morals to them?

It turns out, however, that this story may not be true at all. Purveyor of video games and fan boy mediator Kotaku recently pointed out that there are several anomalies seen in the photo of a passport defaced by a child that bring its authenticity into question, such as:

Have a look for yourself: These all appear to be good points, though that last one seems a little harsh; after all, we are talking about Chinese children. Are children from other parts of the world able to detain their parents at customs with such artistic bombastic aplomb? We suppose we’ll need to allow an independent international body like UNICEF to settle that issue.

Kotaku’s Brian Ashcraft points out the story may have been inspired by a similar case published earlier this year in which a Chinese man was also detained in South Korea when his passport was defaced by his son.

But if that is the case, and this story is proven to be a hoax, then how will people of the world learn this important life lesson?