The passing of Chairman Mao Zedong in 1976 was supposed to end China’s cult of personality around a central, all-powerful leader. Each leader since Mao has been successively weaker, according to popular opinion, but that trend may have come to a close. Current President Xi Jinping has a charisma and knack for getting attention that hasn’t been seen since Deng Xiaoping. He’s already affectionately referred to as “Xi Dada” while his famous and glamorous wife Peng Liyuan has people online in China swooning.

The latest tribute to the Chinese leader has spread on the Chinese internet faster than re-gifted mooncakes. A group of Henan musicians have created a video for a song called Uncle Xi Loves Mummy Peng that has already been viewed more than 20 million times. It has been online a mere five days.

Lyricist Song Zhigang was inspired to write the song while watching CCTV on November 16, and calls the work “a true expression of my innermost feelings”.

The popularity and subject matter of Uncle Xi Loves Mummy Peng is similar to a “red song”, which are ultra-patriotic songs that originated during China’s Revolutionary Era. Usually praising the Chinese Communist Party or serving as a call to arms to protect the motherland, red songs aren’t usually about any a single person except for those that praise Chairman Mao.

Uncle Xi Loves Mummy Peng shares the qualities of a red song by promoting national harmony and establishing an ideal figurehead, namely Xi. Furthermore, the first lyric of this song is very similar to a lyric from the red song Red Asia, but substitutes “Mao Zedong” with “Uncle Xi”.

Here are the lyrics, translated from Chinese:

(verse)
Out of China has appeared Uncle Xi
a man willing to fight tigers of any size
and is not afraid of anything
Whenever I dream, I hope he appears!
China also has a Mummy Peng
who is given only the most beautiful flowers
may she be blessed, may she have good fortune
happiness for the family, country, and the entire world!

(chorus)
Uncle Xi loves Mummy Peng
this kind of love is like a legend
Mummy Peng loves Uncle Xi
of all the love in the world, it is the greatest love of all

Here is the Youku version, which has 1.5 million hits:

This news report quotes some of the positive comments about the vidoe. “Honestly, I was moved to tears by watching it. Their love is very moving and warm,” one said. Another: “I love Mummy Peng most of all. She is dignified and beautiful, and it is very easy for me to say that she is the perfect model of what I want my girlfriend to be!!”

However, other commentators are less open with their praise. These comments were found on Youku:

bobozasa:
Don’t know why, but when I hear this song, I feel embarrassed.

肥肥snidel:
Never heard about propaganda studies? Don’t know about the theory of agenda implementation and the theory of cultivation? Become a member of the media; please read up on it.

钝钝的源少:
Heard this yesterday, think that the people (who made this) are sick, and should be locked up.

蓝蓝在京都:
All of a sudden, I feel it’s a bit like the adoration people used to do old China

奸夫在哪呢奸夫:
Hahaha. I have a phobia of becoming embarrassed, so I don’t dare to click on the video.

The overwhelming response to the song means there are already rumors that Uncle Xi Loves Mummy Peng will be performed during the most important show of the year, the Spring Festival Gala. Singer Yu Runze said that CCTV hasn’t contacted them yet, but hopes they will “come find us”.

The personal relationship between Xi and Peng has been in the news lately.

On November 10 during the APEC summit, tiger-releasing Russian President Vladimir Putin was shown on live television wrapping a coat around the shoulders of Chinese First Lady Peng Liyuan. Any mention of this romantic gesture in the Chinese media was later censored, raising speculation it harms the image of the marriage between President Xi and his wife.

Perhaps to dissuade any doubts of marital disharmony, the following week saw Chinese news media publish the important news that President Xi helped his wife walk through a door on board a ship. Netizens called President Xi is a “gentleman” who is faithful to his wife. 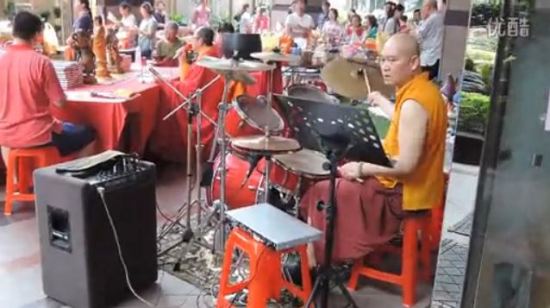 To help bring your Wednesday to a close, here’s a video of a Buddhist monk playing a rock beat on the drums while accompanying another monk that is singing.

We’re not entirely sure how this came about. But here it is, in all its glory. This article was originally published in ITI Bulletin, the journal of the Institute of Translation and Interpreting (www.iti.org.uk) in the UK. Reproduced with permission.

Most people write poetry or lyrics during their teenage years. Then
most people grow up, get proper jobs and stop. Most people don’t go so far astray as to write and record satirical songs in Chinese.

I had no interest in China until after graduating from university and am about as unlike a professional performer as it is possible to get. But after coming to China in May 2007, I was constantly experimenting with ways of learning the language.

One of these was memorising the lyrics to pop songs, karaoke being among the most popular forms of entertainment in the People’s Republic. In November 2008 I started writing my own stuff, but not until 2012 did I start writing the kinds of Chinese songs that won people’s attention.

While trying to remember that telling stories is more effective than climbing on a soapbox or pulpit, my Chinese lyrics over the past two years have touched upon social issues such as nude photo scandals, food safety and kept women. Admittedly, some are flat-out offensive.

One song, “I hate Hunan the least”, lambasts a different province of China in every line and then ends each verse by saying ‘I hate Hunan Province the least’. Another, to the tune of a rousing patriotic anthem, is titled: “China, China, at least It’s Not India!

There seem to be two main ways of getting away with this. The first is to realise that, even in this type of comedy, there is a line. Respecting this line is not so much a matter of towing the line politically, but of knowing that some issues are too sensitive to get a laugh. Taiwan, terrorism and Tiananmen Square are off limits, at least until I am skilled enough to make them funny.

One English song I wrote entitled “Billy” is about a man who thinks that the key to having an abundant sex life is to lower his standards. In China, it is not common to brag about having one-night stands, so the Chinese transposition of this song is about a woman who decides that the way to avoid being left on the shelf is to lower her standards as far as possible.

There is considerable social stigma in China to being a ‘leftover woman’, that is, a woman who is still single after the age of 27. The recently published book “Leftover Women: the Resurgence of Gender Inequality in China” by sociologist Leta Hong Fincher has illustrated the seriousness of this issue, and the lengths that powerful institutions like the Xinhua state news agency have gone to perpetuate this misogyny. In hindsight, I could have handled the issue with more sensitivity and thus been funnier.

The second way to get away with satirising one’s host country is to make oneself at least 70% the butt of the joke. My songs and their videos may make China look bad, but they make their author look a lot worse. Good comedians are often unthreatening neurotics (think Woody Allen). Bad comedians are often smug bullies (think the typical office politics scenario).

The biggest criticism my lyrics come in for is not that they are offensive. It is that they are “肤浅”, which roughly translates as ‘shallow’. In traditional China, a person would take decades to master poetic form, and self-expression in poetry would disappear under a strict schematic pattern. A traditional Chinese lyric will have a rigorous rhyme scheme, under which a world of unspoken emotions is buried. The same cannot be said of my work.

Comedy, particularly satire, tends not to stand the test of time. Some lyrics I wrote 18 months ago already need tweaking because references are outdated. Some issues I sing about will hopefully be irrelevant ten years from now.

Aside from the politics of being a foreigner in China, musical comedy is one of the riskiest forms of entertainment. If a song doesn’t go down well, three minutes is an unacceptably long time for any comedian to go without a laugh. Fortunately, the successful performances have greatly outnumbered the unsuccessful ones.

However, adulation or lack of it is not the point. The point is, we translators go to all this trouble to learn languages, but most of the working opportunities that come our way involve technical copy or business environments when we can’t be ourselves. These lyrics allow an opportunity to win attention while saying something cheeky about my host country. Plus, they are an excuse to continue writing lyrics long after most people have grown out of doing any such thing.