Heroism has a name in China, and that name is “Brother Prop Up”.

It was around 10am on April 5, as reported by Nandu. Li Jian was new to Dongguan, and while walking down Kuangjiangtousan street in Xiabian village, Liaobu county, Li noticed something out of the ordinary: a five year-old girl with her head stuck in the bars of a anti-burglar cage hanging from a sixth floor apartment. The girl had somehow slipped through the cracks of the anti-burglar, but her head did not, saving her from a fall.

After furiously pounding on the door to the apartment but no receiving any response, Li would head up to the roof. There with the help of a neighbor named Sun Qiya, a group of people would knot three bed sheets together in order to assemble a make-shift rope. Holding onto one end of it, they lowered Li down.

Embracing his destiny, Li stepped over the edge and climbed down to the fifth floor; there, he supported himself by standing upon the anti-burglar bars of the fifth floor apartment that were fortunately there. While using one arm to support himself, Li would use his other arm to “prop up” the child so as to prevent any further injury by hanging from her neck. Li would support the girl for a full ten minutes before rescue workers arrived to break down the door of the fifth floor apartment and pry open the anti-burglar bars. At approximately 10:15am, the girl was finally saved.

While Li is new to Dongguan, the sight of a child hanging by their head from a anti-burglar bar may be construed as a familiar sight to long-time residents in Dongguan. On March 31 of last year, a three year-old boy was found hanging by his head from a third floor anti-burglar cage in Huangjiang District, Dongguan while another similar case happened on June 2012 in Tianhe District in Guangzhou.

It’s fortunate that we have come to know the proper name to call such a hero as Li Jian; this is because it’s the same name used in previous media stories to call the heroes who bravely and selflessly helped save these other children helplessly dangling by their heads: “Brother Prop Up”.

Wherever there are children left home alone with anti-burglar devices that are inadequate to trap them inside, these are these heroes that will “prop up” these little victims whenever they fall through the cracks.

Li Jian has been commended by the local police to receive a medal for bravery. 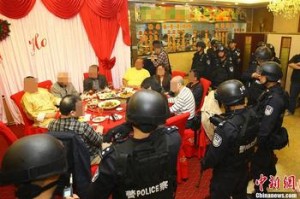