Underage workers are seen working at a factory in Dongguan, wearing green uniforms given by the factory to distinguish them from adult workers.

More than 200 child laborers were found in an electronics factory in Dongguan, one of the country’s largest manufacturing hubs for electronics and consumer goods, trying to earn extra money to cover school expenses, Guangzhou Daily reported on July 3 after conducting an investigative report.

Most of the children are from relatively impoverished rural areas in Hunan Province and the Guangxi Zhuang Autonomous region. The children jumped at the opportunity to earn a monthly salary ranging from RMB 1,000 ($161) to RMB 2,000 ($392) at Ganggu Electronics Factory in Dongkeng Town.

The children were led by a man named Chan, and  were introduced to the factory through a person named Ah Min. Both of the men got a cut of the profits from the underage workers’ salary, the report said.

On June 22, a girl under the age of 15 named Xiao Jing was one of the more than 30 students who signed a contract with the factory, promising to work at least 280 hours per month. After giving the factory copies of their fake ID cards (saying they were over 16) and household registration, the youngsters were immediately put to work the next day.

The legal working age in China is 16.

A few days after starting work, Xiao Jing and 12 other youngsters were fired from the factory without any reason or payment. Most of the children are between 13 and 15 years-old.

Ah Min (pseudonym) said the three parties that include the teacher Chan, the agency and the factory all know the children are too young to work. Child laborers in the factory are given green work uniforms to distinguish them from adult workers, who normally wear blue overalls, according to one child laborer.

A child laborer lies on a bed in the factory’s employee dormitory.

However, the factory management denied they were aware these workers were children. They said they had a hard time verifying the work documents sent by the intermediary agency.

“They can tell these children are not 16 years-old just by one glance. The copies of their fake IDs and household registrations are just for show. No one will look into them. This is the unwritten rule,” Ah Min said.

In fact, sending child labor to well-off southern cities is less of a surprise for local residents in Pingnan County in Guangxi, where some of the children are from. Students in junior high often volunteer to work as child laborers in Guangdong to earn extra cash for school and help out with family expenses.

“Most of the people living in our county are very poor. There is no other way out. Many students work during summer vacations,” said Ah Wei (a pseudonym), uncle to one of the child laborers. “Every summer vacation, several hundred students go out to work. Most of them are younger than 16 years old,” he added.

The factory has paid the salaries for the 13 dismissed students, and promised to send the rest of the youngsters back to Hunan and Guangxi Province.

Although the payments were already given, the majority of the students wanted to stay and continue to work. Officials from the local human resources bureau and executives from the factory are working to persuade the students to go back home.

Most child labor stories involve forced labor, coercion and violence. But as Guangdong’s exports and economic growth slows, poverty-stricken children looking for ready cash fit right into the plans of factories that are currently trying anything to keep operational costs down.

Strictly speaking, hiring voluntary child laborers could be the easiest and cheapest solution. 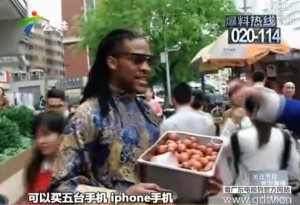 A recent op-ed in South China Morning Post called Dongguan a city “in search of a reason to exist.” The article cited the slowing growth in economic output and the struggling tourist industry.

The rural parts of Dongguan have long been the richest in the province, with per capita income in rural areas at 24,898 yuan, an increase of 9% on the previous year. The city also leads the province in per capita disposable income.

However, inequality remains a huge problem in spite of initiatives such as that to give subsidies to those living below the poverty line. There are some 500 villages and communities in Dongguan, and the 10 poorest have only 1% of the wealth of the 10 richest.

The average per capita annual income is as low as 6,120 yuan, with disposable income at just 15% of that of the average urban resident.

Dongguan party secretary Xu Jianhua said that since 2010, the city has been initiating programs to make sure that the poor are not left behind as Dongguan develops.

However, some areas have not developed significantly during the reform and opening up period and some have even regressed.

Xinwan Community on the southern end of Humen was once a thriving fishing village. Now it is just another impoverished part of the countryside.

Xinwan’s party secretary Deng Jianxin said last year, per capita income in the community was less than 7,000 yuan, with net income at less than 1000 yuan.

Rice being cooked on a wood fire in Xinwan, image courtesy of Nanfang Daily

A Lian, 41, has lived in Xinwan all his life. He lives in one of the many 30 square metre homes that was built during the 1960s and 70s in the former fishing village. He has one daughter in primary school and another at university. The family can barely afford the 10,000 yuan a year it costs to put the older daughter through her studies.

A Lian’s monthly income from his electrical repair shop is usually around 1750 yuan. His wife earns 1000 yuan a month at a factory. They are among the lucky families who make just enough to scrape by.

The poverty that exists in rich Dongguan

This year, Dongguan’s minimum wage increased 14% from 1,100 yuan, which in theory means Dongguan should not contain the extremes of poverty found in the nation’s hinterlands.

Try telling that to A Tang who lives in Zhongtang Village with his family of four. Because of a stomach operation he had several years ago, A Tang is unable to do physically demanding work, so to make use of himself he had to act as housewife before going off to help his sister in the local poultry market.

Together, their income brings them up to the city’s minimum wage, so according to official statistics, they can’t be doing that badly, even though their 70 square metre home is falling apart.

As a lawsuit that was filed in Guangzhou in June shows, corruption is still a huge obstacle in combating poverty in Dongguan.

Shortly after his tour of Guangdong last December, Xi Jinping said local officials should always bear in mind poverty-stricken groups and work for them with their whole heart and soul.

However, the embezzlement of poverty alleviation funds remains a problem in spite of the president calling it an “intolerable crime.”

A reason to exist

Dongguan needs to find a reason to exist, because poverty alleviation projects cannot be funded or effectively implemented if revenue generators like tourism and manufacturing don’t do well.

Dongguan man: ‘My kidney was stolen, I think’

No, you read that right. A man in Dongguan, identified by Southern Daily only as Shu, woke up last Thursday absent his left kidney. He got himself to a hospital, where he told doctors that it had been stolen, but the details of how and why, at the time, escaped him.

The newspaper visited Shu at Dongguan’s Machong Hospital the following day. No relatives or friends with him, Shu groaned with pain as he told police what he did remember. After arriving in Dongguan from Chongqing on February 15, Shu said his plan was to settle down first by renting a place to stay and then to find a job. As for what happened between February 19 and 23, when he checked himself into the hospital, Shu says he only remembers waking up with a pain in his abdomen.

Doctors confirmed that Shu’s left kidney was gone, but were surprised to find the removal had been done professionally and with care, with the incision stitched up properly. Shu’s refusal to call the police at the hospital’s insistence, however, led to their suspicions, shared also by police when Shu conveniently mentioned that he had also come into the possession of 20,000 RMB, the origins of which he could also not explain. Police began an investigation.

Over at China Daily, however, it was reported yesterday that Shu has since admitted to making the whole thing up: there was no memory loss, he sold his kidney to get the money, and

Most of those involved in the case have been captured, police said.