Man beats up doctor, rampages through hospital in Foshan

The latest in a long line of acts of violence against hospital staff in China has taken place in Foshan. A man, claiming to be the husband of a woman who was fatally stabbed the night before, beat up a doctor at Baini Town Huali Hospital in Sanshui District early on Monday (Nov. 4), giving him severe concussion. The man then tore through the hospital smashing equipment for over an hour, Southern Metropolis Daily reports.

A 22 year-old Hubei woman was stabbed 14 times in Baini Town the previous night and paramedics arrived within 15 minutes of being called. She was pronounced dead at the scene. The stabbing took place just outside her rented home in Xiangcun Village at around 9 p.m. Neighbours say they saw her walk into a dark alley with a young man who was wearing a hat and heard screams. As soon as the screams were heard, security guards rushed to the scene and called an ambulance when they found her lying motionless. The attacker has not yet been found.

Xu Baozhang, the deputy director of Baini Town Huali Hospital’s outpatient department, says she had been stabbed in the neck, chest and abdomen.

According to Xu, her corpse was moved from the hospital’s morgue to the local funeral parlour, in keeping with its policy as a private hospital. Then at 3:40 a.m., there was a banging at the door of Xu’s office. A man burst in and shouted: “Where did my woman’s corpse go? I want to kill you!” Before he could react, Xu was hit in the head with a ceramic cup and then kicked repeatedly in the head.

“I have never seen anything like it in my 20 years as a doctor,” Xu told media.

According to nurses and security guards, the man then tore through the hospital, smashing up bulletin boards, computers, chairs and windows before finally being subdued by police at 4:50 a.m. He had loudly (and wrongly) claimed that paramedics had taken half an hour to arrive at the scene of the stabbing.

Xu is suffering from a severe concussion and has two stitches in his head.

A huge clean-up operation needs to be done on floors 1-3 of the hospital and the murder that caused the whole thing still needs to be investigated.

National-level authorities have been called in to deal with the problem of acts of violence against medical staff. 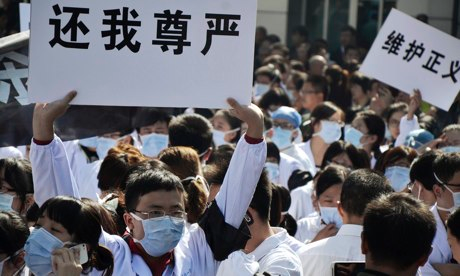 Protestors in their lab coats ask citizens to “Reciprocate our respect” and “Protest justice” in Wenling City, Zhejiang. Image courtesy of The Guardian

Several hundred hospital staff staged a rare protest in Zhejiang Province against attacks on medical workers after a patient stabbed three doctors, killing one of them.

As of the end of September, Guangdong Province’s medical dispute mediation committee had received 2,995 cases involving disputes at hospitals and medical organizations in the province. Medical staff had been injured in more than 30 percent of the cases. The committee was founded in 2011.

15 year old dresses in schoolgirl uniform to solicit sex, says “anything better than being poor”

Police arrested two teenaged girls – one of them only 15 – in Foshan last week after they found the girls soliciting sex, according to the Southern Metropolis Daily.

The two girls wore uniforms from the local technical school in Sanshui District and reported to their 23-year old female ringleader known as “Hei Mei”.  The girls both admitted they were ashamed of their profession, but had no other source of income.  They said they could demand a high price if they went out dressed as school girls, with one of them saying “anything is better than being poor”.

This isn’t the first time young teenaged girls have been found soliciting sex.  A similar case was reported in Shanghai last fall.