With Cipriana Botez and Josh Allerton in Guangzhou and Danny Lee in Hong Kong.

Hong Kong may be ‘Asia’s World City’ and a global financial hub, but it also has the dubious title of the world’s worst light polluter – making this Earth Hour even more appropriate.

Darkness fell for 60 minutes on Saturday as cities from around the world joined people in flicking off the lights to raise awareness about climate change.

Tourists gathering on Tsim Sha Tsui’s waterfront were disappointed the city’s had cancelled its nightly light show, but still cheered when the lights went out on many of Hong Kong’s hundreds of skyscrapers precisely at 8pm.

For one hour, the Pearl River Delta was dark.

Guangzhou’s brightly illuminated skyline was missing a few of its symbols. The Canton Tower, along with the neighbouring IFC and Opera House, merged with the dark night sky as they switched off their glittering lights.

Vincent Qiu, who has worked as a Senior Duty Manager at the Canton Tower since its opening in 2010, thinks participating in Earth Hour is part of the Tower’s responsibility to raise environmental awareness.

“I think that as a landmark of the city, the Canton Tower should join such organised events because nowadays the air pollution is very serious,” he said. “We have a very big impact, not just in Guangzhou, but also in the whole China.”

Macau, which also dimmed its lights, fared far better than Hong Kong in adding some weight to its green credentials.

Thirteen major hotels in the gambling enclave joined forces to switch off their lights, and will do so every month in order to conserve energy. 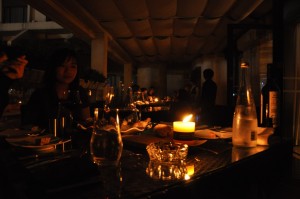 Dining in the dark

Poolside at the China Hotel, a Marriott Hotel, in Guangzhou, a modest yet warm atmosphere engulfed the terrace and indoor restaurant, with candles lit on all the tables and guests dining in the darkness.

“It only began a few years ago so it’s amazing to see how fast it has grown around the world,” said Food & Beverage Guest Service Manager David Nebehay. “The people who created this event were leading by example and that’s what we want to do here, lead by example.”

Ever since Hong Kong joined the ranks of the Earth Hour movement in 2009, it has emitted 35,000 hours of light pollution, while only saving four hours in the process.

A balance is yet to be struck between the environment, and in Hong Kong’s case, tourism. It still doesn’t have laws to deal with external lighting which could alter the skyline’s DNA.

Check out The Nanfang’s photos in Hong Kong’s Victoria Harbour, at the Canton Tower and the Marriott Hotel, a China Hotel in Guangzhou. 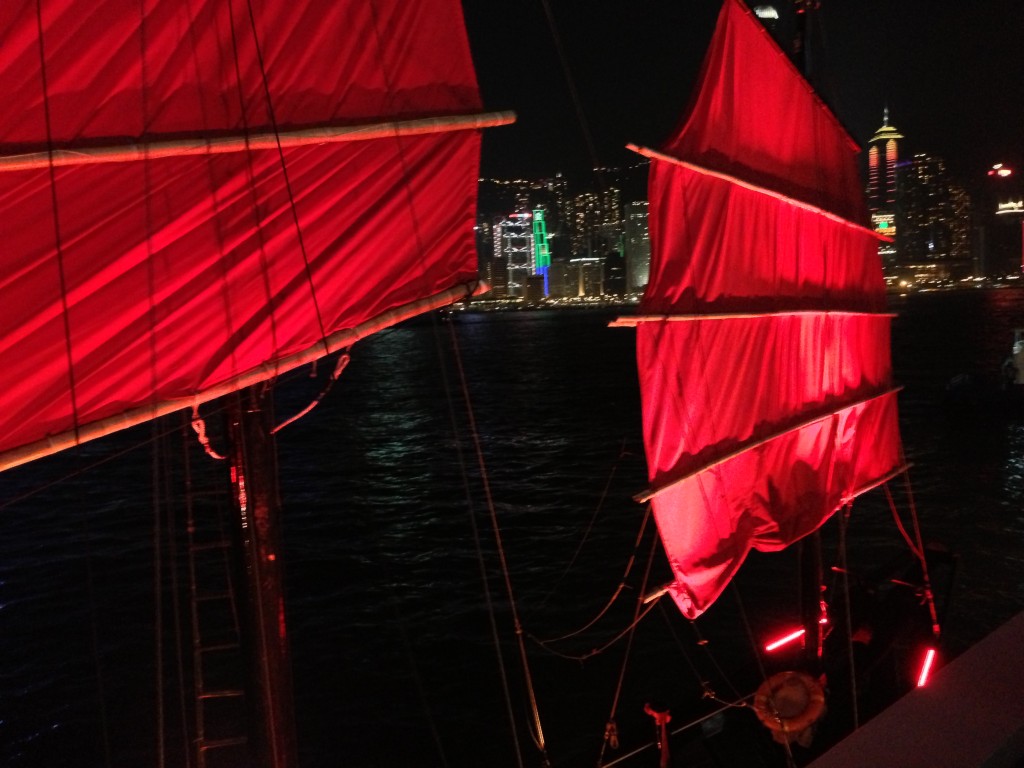 Guangzhou plans on building a large cruise terminal in an attempt to set off a new wave of leisure travel among domestic travellers, who can see the world on the high seas rather than in the air.

Will large liners dock in Nansha?

The city’s ports are best known for hydrofoils, shipping containers and ship building, but that’s about to change. The new cruise terminal is expected to cost RMB2 billion (US$316 million). Officials will sink RMB12.7 billion (US$2.02 billion) into the project as part of a wider scheme to expand a number of ports and create extra capacity at container ports and beyond.

The news follows Beijing’s announcement of an RMB800 billion (US$127 billion) infrastructure war chest for provincial governments to revive the sagging economy.

The Shipping Tribune reported that:

The cruise terminal project is to be located in the fast developing port complex of Nansha, 54km south of downtown Guangzhou and will occupy an area of 134,700 sq m and a quay length of 790 m, comprising of one 100,000-tonne and one 250,000-tonne cruise ship berths.

The development will allow Guangzhou to service ships such as Royal Caribbean’s 225,282-tonne flagship, the Allure of the Seas, which is currently the world’s largest cruise liner.

Hong Kong’s new cruise facility will be built on the old Kai Tak Airport runway and will have space for a 220,000-tonne liner.  Hong Kong is building the new Kai Tak facility due to increased demand and lack of capacity at the current Tsim Sha Tsui’s Ocean Terminal.

According to Jonathan Galaviz, a tourism industry analyst, it is a race to the finish regarding who will service the rising demand for cruises in Asia.  Mr. Galaviz told Bloomberg in June 2012:

“The cruise travel market in Asia is under-served…Cruise lines are going to be looking at the top two to three cities to have a home port in Asia and they need to have the infrastructure.”

Guangzhou and Shenzhen are aiming to fill this need. He also said:

“That can easily be made up for in the growing population of China and India and even Indonesia” as cruise operators seek new destinations for growth, Vu said. “Cruise lines are saying, yes, this is a potential market that we can tap.”

It seems that while Hong Kong can fulfil its role as an internationally-acclaimed city with fewer stringent visa rules for international travellers, mainlanders could opt to set sail from neighbouring PRD ports, provided companies decide to call there.

As this year the Mid-Autumn Festival and National Day Holiday are rolled into one, more than 5 million travellers are expected to cross the border during the double-holiday, which is an average of 640,000 a day, according to Shenzhen Daily.

This is an 11-percent increase on last year.

Monday and Tuesday are expected to see the highest number of Hong Kong-bound travelers, with over 720,000 entering the SAR from Shenzhen on Tuesday.

Daily peak hours will occur between 8:30 a.m. and 12 p.m.and the Futian and Shenzhen Bay checkpoints will be particularly busy.

All checkpoints will have additional staff on duty to handle the influx and travelers can dial 8449-6666 for checkpoint information.

Travelers also can check in for flights departing from Hong Kong at the Futian terminal.