Mark Zuckerberg’s visit to Tsinghua University yesterday revealed some important announcements, but it wasn’t what he said so much as the way he said it that has delighted Chinese audiences.

The founder and CEO of Facebook spoke exclusively in Putonghua at a sit-down interview in front of Tsinghua students. For 29 minutes, Zuckerberg spoke fluent Chinese and smoothly answered questions despite having a hard English accent and with difficultly getting his tones correct.

Zuckerberg received a round of applause by beginning the talk with “大家好” (hello, everybody), and continued to astound the awestruck crowd by continuing in Chinese. The only English spoken during the talk was by the host when he introduced Zuckerberg.

Zuckerberg announced some of his plans, such as the hiring of about 20 Chinese nationals to work abroad, something that has happened annually for awhile. But Zuckerberg usually fielded much simpler questions, all pertaining to China.

When answering “Why did you learn Chinese?”, Zuckerberg said that his wife Priscilla Chan is Chinese, a statement that drew a large round of applause from the audience. He explained that her grandmother only speaks Chinese, and he wanted a way to converse with her.

Besides saying he wanted to learn more about Chinese culture, Zuckerberg said that Chinese is a difficult language to learn, and that he wanted a challenge. To this, the host said, ”Today, let’s all challenge Mark.”

Zuckerberg had earlier met Chen Jining, the principal of Tsinghua, had and held talks about cultivating talent and opportunities to work together. Zuckerberg has agreed to serve as an advisor at Tsinghua.

Zuckerberg has been learning Putonghua since at least 2010.

Here is video so you can hear Zuckerberg’s Putonghua for yourself:

Watch Out, Mo Yan: A Six-Year Old Writes Better Than You!

Tiger Mom is so out. Behold the new poster boy for extreme parenting, He Liesheng — better known by his moniker, Eagle Dad, claims that his son, six-year-old Duoduo, has published a book that is much better than any book written by Chinese writer Mo Yan, the winner of Nobel Prize in Literature in 2012.

We have to hand it to him because perhaps the term “humble” was never in his dictionary. Not only did he bash Mo Yan by saying Duoduo writes better than the literary giant with his pictorial book entitled I Am the Naked Running Brother, but he also announced his ambitions during his son’s Guangzhou book tour to send his fourth-grade son to Tsinghua University when he reaches the age of ten, Yangcheng Evening News reported.

If this plan is realized, Duoduo would become the youngest student to ever enter the top university in China, whose graduates include former premier Zhu Rongji and hundreds of the country’s best and brightest.

The eagle dad has not been short of controversies. He first made international headlines in 2012 when he forced his then four year-old son to run naked in his yellow underwear outside in the snow in New York’s winter, one of the many extreme parenting methods he has since embraced to train his son to be tougher. When interviewed by CNN, he said, ”Like an eagle, I push my child to the limit so he can learn how to fly”. 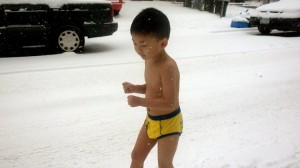 The same year, the pair also made headlines when he and his son got stranded on Japan’s Mount Fuji at 11,000 feet when trying to climb the 12,388 foot mountain. Despite the failed attempt, Duoduo managed to unfurl a banner which read: “Diaoyu Islands belong to China! I want to land on the Diaoyu Islands!” A year later, at the age of five, Duoduo piloted a light aircraft on his own for 35 minutes because his father wanted him to “become braver by flying a plane and develop his curiosity and desire to explore,” Global Times reported.

This year, Duoduo will be busy travelling to different cities to promote his first book, and preparing for the second, third and fourth books to come. His father claims Duoduo writes every day, and each book is ready for publishing.

Perhaps by the age of 10, we will have a child prodigy at Tsinghua University. But four years from now, Duoduo surely will have had to accomplish more tasks, likely extreme ones, assigned by his dad. In other words, four more years robbed from his childhood. 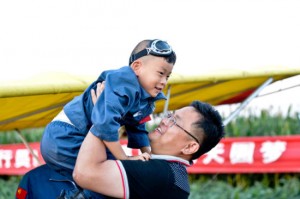 Duoduo and his dad He Liesheng, aka the Eagle Dad. Photo credit: Sina