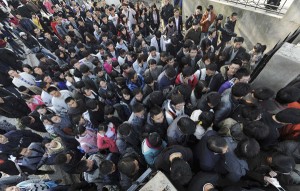 A 26 year-old woman with only four years of work experience has been appointed deputy head of the supervisory division of Zhuhai’s Doumen District, according to Nanfang Daily. This appointment, has, obviously, been met with much suspicion among netizens, many of whom are putting it down to nepotism and questioning her credentials.

After the appointments of 14 new officials were announced on the district government’s website yesterday, a Zhuhai resident named Mr. Zhao called into question the appointment of somebody who only started working in 2008. In response, the district government said in a statement that she had to go through the same “extremely difficult” examination process as everybody else.

The woman, Lai Jiaqi was born in 1986 in Xingning and is not a member of the Communist Party. Netizens are questioning how, since graduating, she managed to pass the government official’s exam and put in the years necessary doing low-level work before getting such a break.

A source at the district government explained that she aced the exam and excelled in everything, including when serving at the city’s Public Security Bureau. She is an unusual person, therefore she got the job at an unusually early age, said the source. Her major at Zhongshan University was in Philosophy, a degree that opens up more doors than is popularly believed.

Even though Lai has no relatives in Zhuhai, she has been accused by netizens of “entering through the back door,” a Chinese expression meaning to get into a prestigious job or school through dishonest means.

One netizen said she may have been at an advantage because she was Hakka in a predominantly Hakka city. Another said, “I’m not saying she entered through the back door, but she may well have allowed somebody to enter hers.” One Sina Weibo user said “We live in a magical place where all kinds of miracles can happen,” and also “So what? Kate Middleton’s baby hasn’t been born yet and is already 4th in line to the throne.”

Government jobs are especially coveted in China due to the stability and perks that they offer, according to this article in the Washington Post that mistakenly calls the jobs “Golden rice bowls” — they’re actually known as “iron rice bowls”.

A survey this year found that nearly half of Chinese university graduates would prefer to work in a government department or a state-owned enterprise, while only 4 percent said they wanted to start their own business. In July, an op-ed in Shenzhen Daily pointed out how this could seriously damage China’s economy in the long-term.