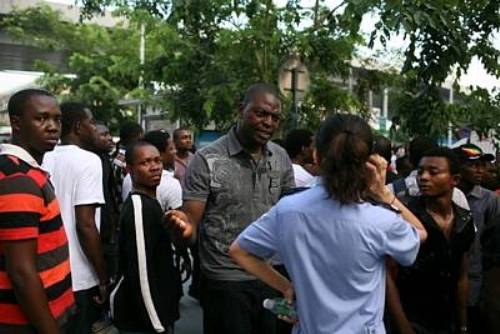 While many expatriates from African countries have succeeded in business in Guangzhou, Chinese policies are making it more difficult for them, and other foreigners, to continue the lives they’ve made for themselves in China.

African countries are being courted by Chinese officials who insist, “China wants to engage every African country as an equal.” However, that sentiment doesn’t seem to be afforded to the residents of these countries.

Last year, the Chinese central government passed the Exit-Entry Administration Law that now requires expats to return to their home nations to renew their visas instead of doing so at intermediary destinations like Hong Kong. Jenni Marsh from the South China Morning Post recently detailed how this policy is impacting the African expat community in Guangzhou. While many people Marsh interviewed plan to return to their home countries in Africa, many others are resolved to carve out a long-term existence in Guangzhou.

The African community has galvanized and fought for longer visa extensions by proving how much they have given back to their newly-adopted city. As a result, visas procured by members of the African community can range from around three months to three years, depending upon the individual’s personal circumstances. And yet, a double standard remains as a Guinean trader named Cellou complained, “If my [Chinese] wife stays in Guinea she can get a Guinea passport.” 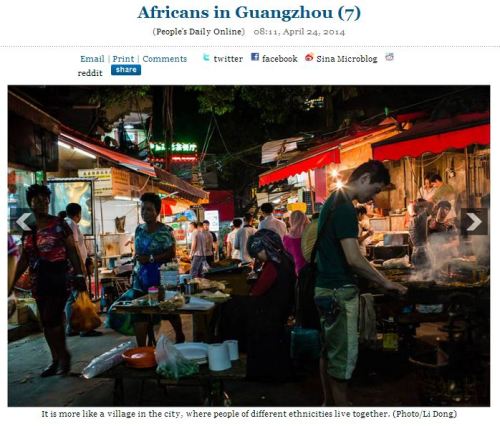 Even before the Exit-Entry Administration Law was passed last year, the African community in Guangzhou was already under pressure with the Guangdong Act of 2011. The Act rewards people who snitch on those who overstay their visas, forbids illegal immigrants to work or study, and gives any police officer the authority to stop foreigners to verify their passports. A Ugandan told Lan Shanshan, a research assistant professor at Baptist University:

“A visa is not a 100 per cent guarantee here. When police stop you, if you do not look like a pleasant person to them, they may draw the line on your visa and cancel it. They say, ‘China gives, China takes.’”

While staying in China may be difficult for African expats, they have still found a way to improve their odds: by marrying a Chinese wife. Linessa Lin Dan, a PhD student at the Chinese University of Hong Kong, said many African expats will marry a Chinese wife for business reasons.

“Opening a shop is very difficult for foreigners,” she says. “You need a Chinese passport or the landlord will ask for a bribe. A Chinese wife can speak to suppliers. It’s useful to have a Chinese partner.

“Many Chinese women want to marry Africans because they are from poor rural areas, often Hunan or Hubei provinces. Marrying a foreigner is a way to upgrade their social status, because the Africans have money.”

This sentiment is seconded by Pat Chukwuonye Chike:

“That is my sacrifice,” says the married father-of-two. “My wife cannot cook. My mother-in-law helps look after the children, and she is poisoning them against Africa. She’s an old woman, she knows the game she’s playing. There is crisis everywhere–terrorists were in Guangzhou last week–it is a sin to make my children scared of Nigeria.”

But perhaps the biggest problem facing the African community of Guangzhou is how to deal with mixed-race children. These kids are born predominantly to an African father and a Chinese mother and are caught between cultures. Chinese immigration policies threaten to separate those families.

While the one-child policy does not include foreigners, Africans are subject to the policy even though they do not qualify for Chinese citizenship. Furthermore, these mixed-race children risk being marginalized by a classification system that does not recognize “mixed-race” as an option.

Even the local media treatment has been mixed:

Lan Shanshan, a research assistant professor at Baptist University, claims there is a media edict on the mainland to report favourably on Africans in China, hence the state-owned newspaper Guangming Daily’s three-part special titled “Friends From Africa, How are You Doing in Guangzhou?”, in 2012. 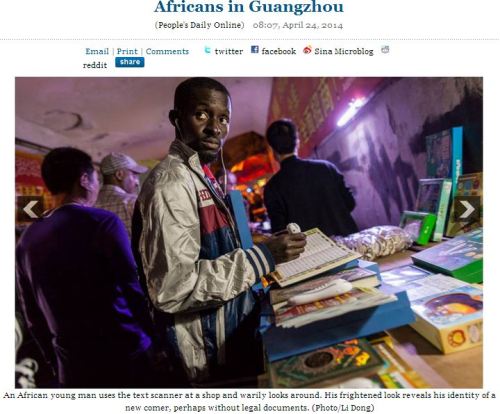 And yet, we’ve seen pictorials by the People’s Daily that insinuate an unidentified African person to be an illegal immigrant, while news reports flat out finger the African community as the source of blame for the drug woes currently plaguing China.

Regardless, it is becoming more difficult everyday for an African expat to stay in China.