Another suicide at Foxconn? Employee jumps off 9th floor after slitting wrists 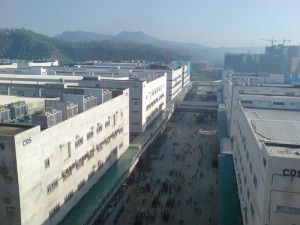 The Foxconn factory in Guanlan

Foxconn, the manufacturer of iDevices, Kindles, Samsung phones, tablets, e-readers and more, is coming under the gun once again after another of its young employees was found dead last Wednesday in Guanlan, very close to Shenzhen.

Reports say the man worked at one of Foxconn’s factories in Shenzhen.  He jumped off the 9th floor of an apartment complex – a private building unrelated to Foxconn – after slitting his wrists, according to IDG News which cited local media.  Other reports confirmed the man died and worked at Foxconn, but it’s not clear that he committed suicide as a result of his work.

Foxconn, which employees hundreds of thousands of people in Shenzhen, has come under fire in recent years after several of its employees committed suicide at its factories. PC World says the company is trying to improve, however:

Earlier this year, Apple announced the Fair Labor Association (FLA) would conduct audits of Foxconn factories, including one at Guanlan, which employs more than 70,000 workers.

In the FLA’s latest audit of Foxconn, the group said the company was steadily making improvements in conditions at its factory. Foxconn has also said the company is committed to worker safety, and has been making changes including raising wages and limiting workers’ overtime.

The company has however recently come under scrutiny for allegedly forcing vocational students to work at its factories, as part of its internship program. Foxconn denies the allegation, and has stated the workers are free to leave the program at anytime.

You can learn more about life in factories in the PRD in the latest edition of Nanfang TV.

Feeling Depressed and Suicidal in China? There’s an App For That
comments powered by Disqus