Early on the morning of February 6, a long-distance bus carrying 53 passengers from Guangzhou to Dongguan arrived outside the Dongguan Bus Station. Seconds after passengers began exiting the bus, however, they were surrounded by about ten men. Seven passengers were then robbed of their bags and other personal belongings, and the men ran off.

It was about 3:30 a.m. when the robbery took place. The bus driver pulled over to let passengers off just outside the terminal. Three taxis and several motorcycles suddenly surrounded the bus. Ten men approached the 20-odd passengers who had already gotten off, grabbing what they could. 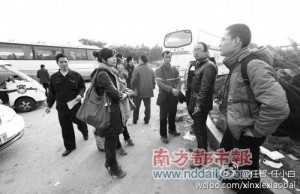 The bus driver, still helping other passengers retrieve their bags, heard screaming outside the bus and, realizing a robbery was in progress, called the police. Speaking to Yangcheng Evening News, the driver said the men were gone after no more than two minutes, too quickly for anyone to catch any license plate numbers. Of the seven passengers who ended up being robbed, two lost a cellphone and five lost their luggage.

Guangzhou No. 2 Bus Company, which owns the bus targeted in the robbery, has compensated the victims with payments ranging from 600-1000 RMB each, paying out a total of 5800 RMB.

According to the bus company, this was the first time such an incident had targeted one of their buses. A spokesperson for the company explained that the reason the bus didn’t drop passengers off inside the station was that it was an extra bus sent from Guangzhou Bus Station, which operates around the clock, meaning the bus arrived before Dongguan Bus Station had opened for service.

The bus company added that it will contact Dongguan Bus Station staff ahead of further after-hours buses to ensure that precautions are taken to prevent this from happening again.

Police say they are still investigating.