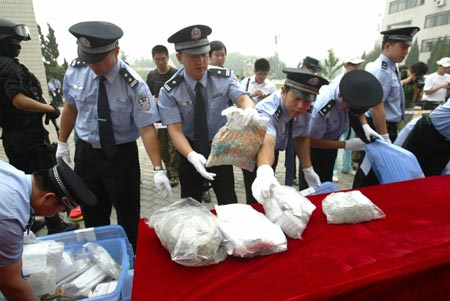 Hong Kong customs seized drugs worth an estimated US$1.28 million at the Shenzhen Bay checkpoint from a private vehicle heading to the Mainland Saturday.

Drugs seized from the vehicle — which was being driven by two as yet unidentified men, aged 29 and 42 — included 1.3 kilograms of cocaine, 220 tablets of MDMA (ecstasy) and 17 grams of cannabis seeds, according to a HKSAR Government press release.

China has been known to execute drug traffickers. In December 2009, British man Akmal Shaikh, 53, was executed after being convicted of smuggling, sparking international fury. Punishments more commonly include life in prison and fines of up to US$5 million.

Last week, the Epoch Times reported that “date-rape drugs are flying out of China at break-neck speed despite recent crackdowns in Hong Kong to reduce the number of sellers.” A worrying sign that the country’s drug trade remains largely out of control.

On the same day, The Nanfang reported on a Guangzhou drugs sting involving over 1,300 law-enforcement officers that resulted in the arrest of 10 expats. A total of 168 suspects were taken into custody, and police seized an unspecified amount of methamphetamine and heroin. Trafficking of more than 50 grams of  heroin is punishable by death under China’s criminal law.

Meanwhile, 38 suspects were arrested Thursday on drug charges in Huizhou City, Guangdong Province, after 15 kilograms of ketamine were seized by police.

At the end of June, 2.95 tons of illegal drugs were incinerated in Shenzhen to mark the International Day Against Drug Abuse and Illicit Trafficking, The Nanfang reported.

Is There Racism Just Under The Surface in Hong Kong?