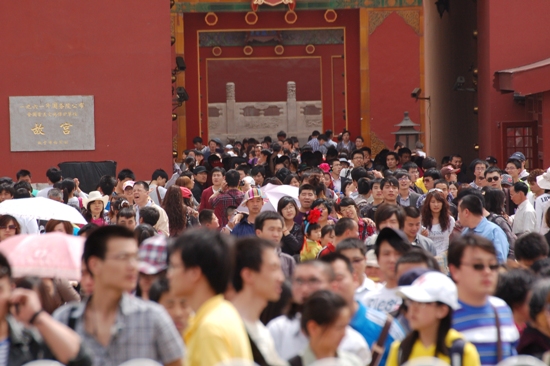 Conde Nast Traveler has recently published the results of a poll that shows Beijing is considered among the world’s most unfriendly cities according to tourists.

The term “unfriendly” isn’t necessarily a reflection of a city’s residents. Instead, it’s a judgment on how accessible and accommodating a city is towards its international tourists. For example, Johannesburg was ranked first because of its high crime rate and “danger of traveling alone”.

Beijing ranks at number six on the list, apparently because of its “terrible pollution” and “dirty streets” that detract from its beautiful attractions. With that, China Daily issued the following post:

Is Beijing the world’s most unfriendly city?
US travel magazine Conde Nast Traveler has published a list of the world’s most unfriendly cities for 2014 upon which Beijing is ranked at number six. The magazine thinks that environmental pollution, traffic congestion and overcrowding are the main reasons for being on the list. The top city on the list is Johannesburg, and there are three well-known romantic French cities on the list: Paris (#4), Marsailles (#4), and Cannes (#2).

As China’s capital, Beijing certainly has its problems. Beijing does have bad air pollution, congested streets and too many people, so it can’t dispute these facts. The contention seems to be over the word “unfriendly”.  Netizens in China, of course, have sounded off over the news:

Rutina想要其乐融融：
I don’t understand the meaning of the word “unfriendly”. [tragic.emo]

悲怆的震魂曲：
This list was determined by the Americans themselves, no wonder there aren’t any of their own US cities on this list.

小善爱吃奥利奥：
Let’s see you make New York, Los Angeles, and Washington not be congested with traffic!

fytly：
There really aren’t any US cities listed.

小鱼吃大鱼的地盘：
I’ve never been to Beijing; I support this.

活得好累KKK：
It seems as though this isn’t wrong. In loving our country, we must look at all the facts.

Or, it may be time to accept that Beijing is a terrible place to find yourself at the end of a journey. In May, a survey of 54,000 people by TripAdvisor determined that Beijing is the second-worst travel destination in the world, topped only by Moscow.

The survey ranked cities by the quality of taxi services provided, the helpfulness of locals, and, yes, the friendliness of its residents.