Dongguan gangs purposely disfigure victims, send them out as beggars 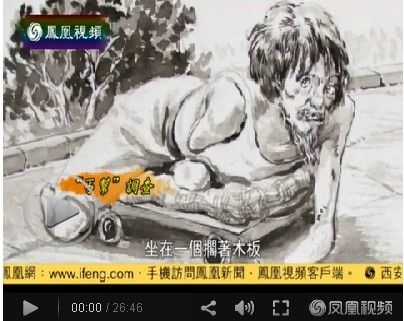 About 3,000 people in Dongguan are living on on the streets, making money by begging. We see them outside of shopping malls, in train stations or anywhere where some spare change might come easy. Few pay attention to their dirt-covered rags, disabled bodies or unfortunate stories scribbled on cardboard signs hanging around their necks. But some are paying attention; often in the corner, closely watching every move from afar, but for all for the wrong reasons.

A report has surfaced claiming among Dongguan’s beggars, a majority are controlled by local organized gangs. The gang members purposely maimed, crippled and disfigured trafficked people, including children and the elderly, to appeal for public sympathy and money, according to an investigative report by Ifeng TV’s program called Shehui Nengjiangdu (社会能见度) on March 13.

According to Wang Xiuyong, who was interviewed in the program and went undercover in one of the gangs, one of the ringleaders bashed children’s legs with bricks to make them “look sympathetic”. When the wounds were about to scab over, the ringleader would strike the wound again to prevent it from healing, Wang said. 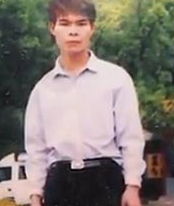 Liu Jianqiu pictured when he was healthy.

In another case, a woman called Lu Xiaoyan was first contacted by her long “dead” cousin Lu Jianqiu one night in September 2010. Lu was thought to be dead after he disappeared in 2000 on his way to see his girlfriend. When Lu saw her cousin, she did not even recognize him because his two legs and his right hand were amputated.  Lu told her cousin that he was held captive by a local gang for almost a year until his wounds scabbed, and immediately afterwards he was forced out on the streets to beg for as long as 10 years.

But before Lu got a chance to ask the details of her cousin’s plight, and information about the people who did this, he was hauled into a mini-van by two tall, well-built men, Lu told the TV program. The gang members even threatened to slash Liu Xiaoyan to death if she wanted to save him. Despite years of efforts to track down her cousin, Lu Jianqiu was never found again.

Dongguan is estimated to have more than 10 beggar gangs in the city, mainly run by people from Zhoukou, Zhukoudian and Xinyang of central Henan Province, according to Wang, who was quoted in an article written by Lu Hua for Financial Times Chinese.

Wang said the Zhoukou gang had close ties with local police. Many policemen regularly collect fees from the gangs, and established a sort of unwritten agreement with them as long as they don’t cause major problems for the city, according to Wang.

So next time we walk pass a beggar in the city, there might be more going on than is evident. Whether the beggars are genuine or victims of gangs, it doesn’t appear as though anybody is interested in doing much about it.