A 15 year-old Guangdong student stabbed his teacher in a vicious attack in broad daylight, reports the Southern Metropolis Report.

A third-year junior middle school student named Xie knifed a female teacher ten times in an attack described as an “ambush”. The incident occurred at around 5pm on June 18 on Baoyuan Road near a China Construction Bank in Kaiping, near the City of Jiangmen. Xie was apprehended at the scene by an off-duty police officer and a crowd of bystanders.

Today, police confirmed that the stabbing victim was Xie’s primary school teacher from a school he had graduated from three years prior.

UPDATE 9:51pm June 19: Some additional details left out from our report: Xie explains that the reason he attacked his former schoolteacher is because her “discipline was too strict”. Meanwhile, the victim has non-life threatening injuries. 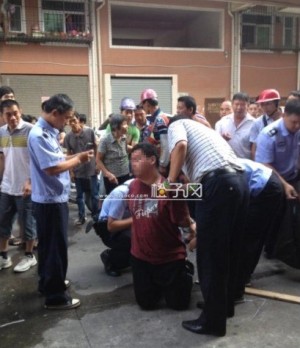