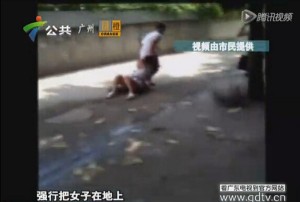 The man in white dragged his wife by the hair for dozens of meters.

On June 27, a man in Baiyun District of Guangzhou was seen beating and stomping on his wife’s stomach in public and dragging her by the hair for dozens of meters in broad daylight in front of their son,  Guangdong TV reported on June 29.

The violence went on for more than 10 minutes. While the man was dragging the woman along the road, the woman was carrying her son on her back. This caused the boy to sustain bruises and bleeding to his scalp according to witnesses quoted in the report, but this did not stop the man from laying his hands on his son, the witness said.

Although the man’s mother arrived and tried to stop the beating, the man continued to beat the woman with the intent to “beat her to death,” another witness told the TV station.

It was not immediately known what caused the violent beating, but a neighbour said it was a “family matter”. We have noticed increasing reports on domestic violence in Guangzhou driving up divorce rates and child abuse in the city. Despite bystanders recording the beating on their phones, it appears no one offered to help.