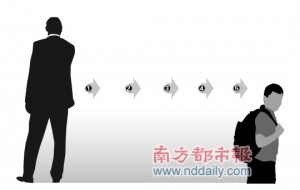 The leader of the inspection department of the NGO Administration Office of the Guangzhou Civil Affairs Bureau has been accused of pursuing and raping young boys, Southern Metropolis Daily reports.

The claim was made by the father of one of the victims who goes by the alias Xiao Jie.

Xiao Jie later claimed that he had been molested by the stranger after being “lured into his home”. It was seen on Xiao Jie’s QQ chat history that he had asked for several computer games in exchange for keeping quiet. The stranger had even bought a computer for him for RMB20,000.

In order to catch the paedophile, Mr Su had a female friend open a fake QQ account and pretend to be a young boy, later arranging to meet the paedophile. The plan proved successful and the suspect has been arrested. The man’s name is Li Jun, who turns out to be the leader of the inspection department of the NGO Administration Office at the Guangzhou Civil Affairs Bureau.

The coterie of the unit described Li as “gentle, silent and tending to keep to himself”. Li has now been charged with raping three boys and his QQ contact list was found to have more than 160 boys on it under the age of 13.

Shenzheners Most Likely To Skip Town Over Holiday

If you use WeChat, don’t do this