Guangzhou men strut in high heels for chance at cash

Get your heels on, men, it

Guangzhou media were on hand to catch photos of a runway show held streetside this past weekend in the city’s Tianhe district, featuring next season’s high heel fashions modeled not by women, but men.

A promotional event sponsored by the MOPARK (摩登百货岗顶店) department store chain‘s Gangding outlet, the gender-bending runway show had only three models, each competing to win the RMB 1,000 prize for best “female feeling” in the way they presented their shoes.

“It’s more difficult than trying to walk on stilts,” said one of the tipsy competitors who actually made down the runway and back. Another guy couldn’t even straighten his legs enough to walk and the third almost fell off the stage as soon as he stepped onto it.

More photos from the show here, we only hope the guy who showed up in drag ended up the winner.

A similar annual event held in Silicon Valley received no shortage of coverage in Chinese media last year, with its message of support for women’s rights and the fight against domestic violence and sex crimes. 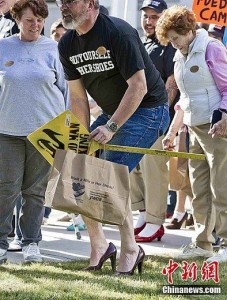