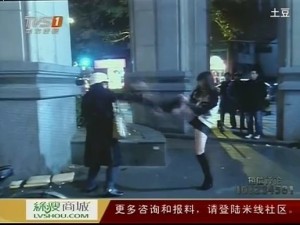 The knife is kicked out of the suicidal woman’s hand

An unidentified woman in Guangzhou, who looks like she’s barely out of her teens, has become an online sensation after a display of athleticism and bravery last Saturday (January 5).

At around 8:20 p.m., a woman in her thirties was seen standing on a street corner at Baogang Boulevard waving a knife and threatening to kill herself, Southern Satellite Television reports.

As onlookers gathered round, she became more hysterical and started throwing money around, including 100 yuan and 50 yuan notes as well as small change. By this stage, she was already bleeding out of her hands, according to one witness, Miss Li.

Nobody dared approach the woman but some people picked the money off the ground. Then, a woman, thought to be in her late teens and wearing shorts in spite of the weather, picked up some notes and tentatively approached the hysterical woman, offering to give her the notes back.

As the knife-wielding woman was about to accept the notes, the woman kung fu kicked the knife from her hands with enormous speed and athleticism before both women fled in seperate directions.

Netizens have nicknamed the brave young woman “heroine with sexy legs” due to the length, whiteness and athleticism of her legs.

All of the cash was returned to police and neither woman had been identified as of yesterday afternoon.

In the past year, many people in China have been talking about a decline in public morals. One prominent example was the incident in which 2 year-old Wang Yue was run over and left for dead. Literary wunderkind Han Han has publicly thanked Hong Kong and Taiwan for “protecting Chinese civilization,” as morals decline on the mainland.

But there have also been examples of selfless behaviour on the Chinese mainland. Last week, bus driver Wu Bin was given a large funeral in Hangzhou for showing exceptional composure in ensuring the safety of others after being fatally wounded. There was also the 29 year-old middle school teacher, Zhang Lili, who lost both legs while rescuing two students from being run over by a bus.

Now there is the Shenzhen taxi driver Li Dongying. Han Han cited an example of a Taiwan taxi driver who returned his lost mobile phone to illustrate that Taiwanese were more generous than mainlanders. But Li returned something considerably more valuable than a mobile phone.

On Sunday night at 11:37, a Hong Kong man identified as Mr Zhang, while talking on his phone and in a hurry to get to his hotel, left a suitcase containing 150,000 US dollars and 550,000 Euros in a taxi with the license plate number B394T1. As soon as he noticed the suitcase, driver Li went to Nanhu Police Station which was the closest one to the Day’s Inn Hotel in Luohu District at which Zhang was staying. When Li got there, he noticed that Zhang was already at the station reporting the loss, according to The Daily Sunshine.

On receiving the money, which was essential to his manufacturing business, Zhang exclaimed that Shenzhen was a city full of good people, and extended his thanks to Li. Li downplayed the incident, saying he was simply doing his duty. He told the Daily Sunshine that he often sees passengers leave things behind, and always returns them because failing to do so “could ruin somebody’s life.”

On first noticing the bag, Li opened it to see what was in it. He then called his company and asked for advice on what to do.

According to local television, taxi drivers are legally obliged to return lost items to passengers, but would you, on discovering the contents of Zhang’s suitcase, have shown such integrity?