Chinese Find Many to Blame for Charlie Hebdo Terrorist Attack 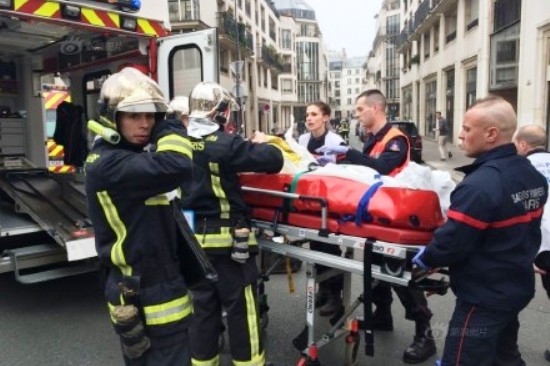 The terrorist attack at French satirical magazine Charlie Hebdo has galvanized China, with widespread coverage and commentary in social media.

Chinese news outlets mostly followed the western press in their characterization of the incident as a terrorist attack, with some offering an explainer of the French magazine and its tendency to attract controversy. 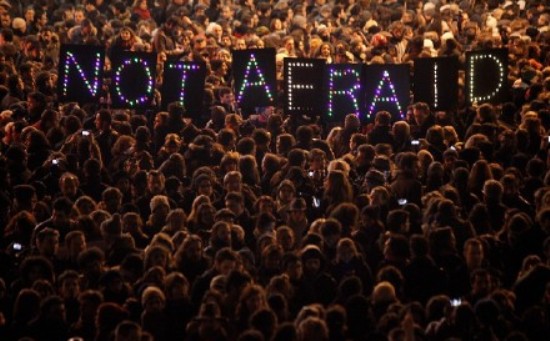 163 published a retrospective of many of the magazine’s lewdest covers, including the Virgin Mary in a compromised position as well as its infamous depiction of the Prophet Muhammad.

Sina provided an introduction to Charlie Hebdo, noting that French media has a long tradition of using satire with high-profile targets including royalty, government, police, and banks. However, it notes the magazine was provocative to win an audience because it was a relatively small publication.

Furthermore, Sina says the magazine’s objective is to challenge authority and satirize current political events, but noted the magazine was regularly criticized for being “vulgar” and “heartless”. 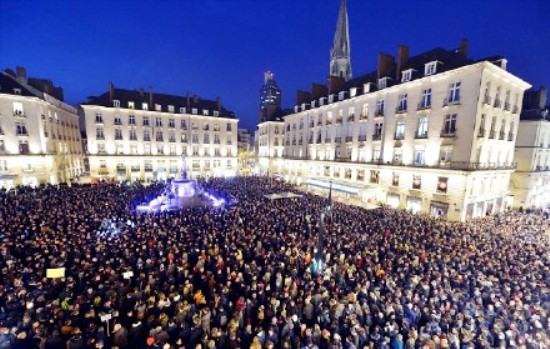 Chinese Weibo users were very forthcoming with their opinions, with some people re-publishing the controversial cartoon depiction of the Prophet Muhammad. But not everybody sided with the magazine:

空空儿LLP：
This time, Charlie Hebdo is not right.

胖纸段：
Everyone could see what was coming from their provocative picture of the Virgin Mary.

JettiaMo：
Right now is a terrible time for print media.

瓦格纳罗兰：
Thanks to the author for posting these materials from Charlie Hebdo. It seems that core values can have cultural differences. Any system of values can not violate universal values. 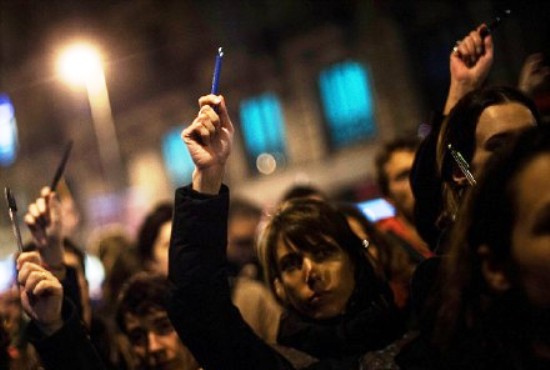 One blamed the entire country of France:

信仰的胜利:
This is a non-mainstream magazine in France with a small circulation and readership. Two years ago when US Americans filmed The Innocence of Muslims and were satirizing Muslims, Charlie Hebdo also got in on the action and published a cartoon of the Prophet Muhammad. This caused a controversy that CCTV covered. During such sensitive times, France added fuel to the fire; they are the accomplices to the USA (referred to using a derogatory name), and have attracted the ire of France’s Muslim community. However you look at it, this is not a sensible thing to do as the spark for revenge has already been lit.

One went further, blaming all of Europe:

P212121：
Europe was the one that sinned first. Several hundred years ago, Spain went on a violent crusade and drove all the Muslims out of Europe.

While others place the blame squarely on Islam:

eagles小鹰：
I think that equal treatment is a basic principle. If other people insult you, then you can fiercely insult them back. If other people hit you with their fist, then you fiercely kick back with your foot. However, if you kill someone for insulting you, and you think that this person doesn’t have the right to insult you, then by this logic, how can your family and even your ethnic group be preserved?

blue_石头：
(We) should attack evil cults.

毛笔小飞：
Muslims are an evil cult, and are a cancer on humanity.

北京厨子小号:
This attack has not made me comfortable with certain religions.

钉宫喵2：
These ignorant, modern day zealots will soon be the demise of the Muslim religion.

葱花子：
Muslims say that if you aren’t a believer, then you can go to hell.

These people were on the fence:

钟微老老实实的名字：
There are limits to humor just as there are for leniency and punishment.

联邦论者：
Is this something to teach to the younger generation, or just vulgar claptrap? A print media crisis, or moral crisis?

Here are a few more comments:

韩敢敢：
It’s not as though all Muslims want to kill these cartoonists. No matter if they are Muslim, Christian, Buddhists, or material atheists, they are all humans first.

saddie：
Chinese people have a hard time understanding why foreigners would do things to harm others with no benefit to themselves after having satisfying their need for hunger and have nothing left to do. Wouldn’t it be great to be a French citizen with high welfare benefits? The reason to distinguish yourself (in society) is so that you can eat fine food, drink fine wine, and sleep with beautiful women. Everything you can want, beyond your capability to consume it. In fact, this is the only distinction between you and them: in this life, just what are you living for?

hongyuanjue：
You can’t ridicule a belief in RPG’s and AK47, this is common knowledge.

老高高相奎:
The US dropped nuclear bombs on Nagasaki and Hiroshima; this signifies that the US is a terrorist country! Japan should take revenge against the US, this is a righteous action!

Chinese people respond to the devastation in Japan

It seems that the horrific tragedy playing out in northeastern Japan is bringing out the best, and occasionally the worst, in China’s netizens. There’s no doubt that China and Japan have a very long and intertwined history, and emotions between the two Asian neighbours run deep. Reactions on China’s most popular microblog, Sina Weibo, have been mixed. The China Smack blog does an excellent job translating many of the more positive comments inspired by images of Japanese people lining up for food and water and walking home because of no train service. We decided to post a select few here:

In China, I bet [people] would have immediately broken into and looted the surrounding convenience stores/supermarkets.

A tiny pellet of a country, with nothing [few resources], being able to beat the shit and piss out of Russia and China…is not without reasons…

In Japan, the cars yield to the people. In China, the cars can’t wait to run over your body, even if you have the green light and the car is making a turn.

Without bringing up anything else, on the character exhibited when fasting disaster, we really can’t compare.
Even when there is no disaster, for simply sitting in a seat or using the toilet, we’re capable of fighting and arguing over.

We won’t post some of the more negative (read: ignorant) comments posted on Weibo, but you can read them for yourselves here. Of course, ignorance isn’t just a trait found in China. But such is the reaction when disaster befalls a nation that is despised by a great many Chinese people for its historical atrocities.

On a positive note, Premier Wen Jiabao addressed the Japanese earthquake at the close of the National People’s Congress yesterday:

It was only at the very end of his nearly 2.5-hour press conference on Monday that Premier Wen Jiabao turned his attention to Japan. He first asked if there were Japanese journalists among the gathering of hundreds (there were), then said he didn’t want to take a question from them, but had something to say. Wen offered China’s “deep condolences” to Japan.

Wen meets with reporters once every year, at the close of the National People’s Congress. He takes a pre-screened selection of questions from journalists from China and other countries. This year no Japanese reporter was called on. Instead, Wen made a statement.

“China is also a country prone to earthquake disasters and we fully empathize with how they feel now,” Wen said. “We will provide more as Japan needs it and we want to continue to help as necessary.”

Some (such as Slate) are arguing that as one of the world’s richest countries, Japan doesn’t necessarily need cash donations, if you wish to help. Instead, the country will likely need blood, which you can donate at any Red Cross in the PRD (there are many).