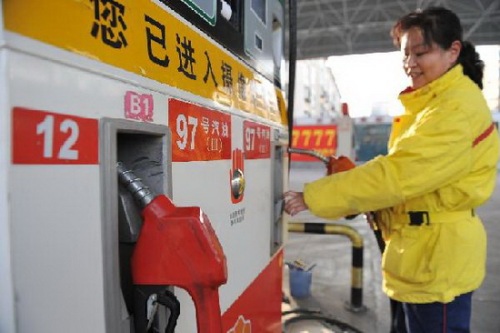 Almost a month ahead of schedule, a new standard of cleaner gasoline is now available in 14 cities around Guangdong including Guangzhou, Shenzhen, Dongguan, and Maoming, reported the Southern Metropolis Daily.

Originally planned to be introduced on July 1, the new gasoline grade is called “National V”. It will replace the existing “National IV” gasoline that is very similar in specifications to the Euro IV.

The new fuel will bring a slight increase to gas prices estimated at RMB 0.10. However, no increase will be made while it is being introduced.

Other Guangdong cities will gradually receive the new fuel, a total process expected to be completed by July 1, 2015. “National V” diesel fuel is expected to have completed its implementation in Guangdong by that same date as well.

With the price of gas in China continuing to soar, surpassing even US fuel prices last week, Shenzhen has decided to further raise its taxi fuel surcharge from 1 RMB to 4 RMB per ride, Yangcheng Evening News reports.

The higher fuel surcharge was originally meant to take effect starting March 21, in accordance with an official nationwide gas price hike announced on March 20. However, as that decision generated intense dissatisfaction among the public—taxi drivers and taxi companies in particular—the Shenzhen government decided to temporarily offset the new prices, which took effect in the city on Monday this week (March 26).

Yet, based on regulations regarding the raising of gas prices in Shenzhen, passed after a public hearing held in August 2009, fuel surcharges many only be increased following a two-month observation period. As of Monday this week, only seven days had passed since Beijing issued its decree to raise gas prices.

Shenzhen’s justification has been that international oil prices has been rising steadily and are very unlikely to fluctuate drastically within a short period, thus there was no need to set an observation period this time.

That explanation has failed to convince citizens. According to Zheng Xueding, a citizen who attended the public hearing at which the two-month observation period regulation was passed, there were no clauses written into the document allowing for such an exemption in the process of adjusting prices. Moreover, it states clearly that during any time in which gas prices lie between 7.14 and 8.41 RMB per liter, the tax fuel surcharge for taxis is fixed at 2 RMB per ride.

The current price for #93 gas in Shenzhen is 8.37 RMB per liter, but the city’s fuel surcharge has rested at 3 RMB for quite some time.

Guangzhou city hall has stated publicly that fuel surcharges will not be raised for the time being. In Shantou, the city’s Price Control Administration announced this week that a hearing will be held in April to debate a proposal to raise the starting fare for Shantou taxis from the current 5 RMB to 10 RMB.