Hunan Man Sets Himself on Fire In Government Building

[This article contains material which may be upsetting to some readers]

A man set himself on fire at the government buildings in Xiangtan, Hunan Province, on Friday (August 1).

The self-immolation occurred at 4:32 pm, reports iFeng, when the man entered the government complex. After extinguishing the fire, the man was sent to hospital where he is being treated for third degree burns over 99% of his body.

The man is aged 55 years-old and used to work at a boiler factory in Xiangtan. There’s no word on his motivation, but judging by the location people believe he may have had a grievance with authorities.

PJ O’Rourke once said that a little government and a little luck are essential in life but only a fool would rely on both. Residents in some Guangdong towns have not even had the option of benefiting from a little government this year as an investigation has showed that several government departments in the province have failed to open to the public on numerous days this year.

The reason? The workers have been playing cards for money with friends and family, Southern Metropolis Daily reports. 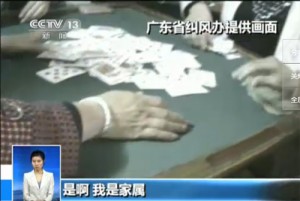 The first such case reported was on January 25 in Longchuan, a predominantly Hakka county to the north of Heyuan. On that day, neither the land and resources department nor the judicial department opened and no explanation was given.

Another such case was on January 29 in Leizhou when several government departments did not open. An investigation showed that the workers were playing cards for money with family and colleagues.

An opinion piece in Shenzhen Daily last year lamented that the popularity of cushy government jobs was killing the entrepreneurial spirit of young Chinese.

This is the latest case of investigative journalism holding government workers to account. The Guangzhou-based Southern Metropolis Daily was known for such journalism around the time of SARS 10 years ago. One such incident led to editor-in-chief Cheng Yizhong being jailed and coming out severely disillusioned about the influence the media could have over the government.