Patients in Shenzhen who want medical attention from American doctors will no longer have to fly halfway around the world to get it.

Under a new agreement, US doctors will be able to control advanced robots at Shenzhen People’s Hospital to perform surgery remotely.  The deal is between the hospital in Shenzhen and the Methodist Hospital in Houston, Texas, and also covers cooperation and the training of medical staff.

The biggest part of the deal, though, centers around the ability of US-based doctors to conduct surgical operations on Shenzhen-based patients.  Methodist Hospital boasts some of the most advanced surgical apparatus in the world, such as these surgical robots, Shenzhen Economic Daily reports.

The robot, courtesy of U.S. Health.

US Health News described the robot, which resembles an oversized carpet cleaner, in this July 2009 article:

Robots are increasingly making their mark in the operating room, too. Originally approved for general abdominal procedures like gallbladder removal, robotic surgery—the surgeon manipulates computer controls rather than a scalpel—is now used for heart and prostate cancer surgery, gynecologic procedures, and bariatric surgery, among others. With the help of a tiny camera inserted through an incision “port,” a surgeon can see the surgical field onscreen as he sits at a console in the operating room, from which he guides the robot’s instruments, also inserted through ports.

Someday, the doctor guiding the robot could be sitting at a console literally across the world from the patient. If remote surgery eventually becomes commercially available, many lives might be saved in hard-to-reach locations, from remote islands to battlefields.

Sun Tong, who is responsible for international affairs at the Methodist Hospital, said the hospital has four surgical robots in operation.

Yang Song, President of Shenzhen People’s Hospital, revealed that some staff have been selected to learn English and train in Houston. They are expected to start flying out this year.

The Methodist Hospital performed its first operation remotely through the use of a robot in 2004, and it was a success. There’s no word on when the robots will be deployed in Shenzhen.

A man diagnosed with menstrual disorder? It happened in Hainan

The man's report of "irregular menstruation" from a doctor in Hainan.

Questions are being raised about how carefully doctors and nurses are doing their jobs after a man was told by the Central Hospital of Hainan Province that he has a menstrual disorder, according to Hinews.com. Lin Zhou, 25, went to the hospital for a check-up Sunday after feeling uncomfortable, including suffering from an upset stomach. After the check-up, he received a report, on which the clinical diagnosis read “menstrual disorder”.

“I didn’t know whether to laugh or cry,” Lin told Hainan local television. The hospital explained that there was a mix up in its system due to it being a particularly busy day, and said that the doctor responsible would be disciplined.

Tang Zhi, who is in charge of safety at the hospital, explained that Lin’s report had been mixed up with that of a woman named Lin Ying. The hospital pledged to prevent any such mistakes from being made again.

The news has gone viral on Sina Weibo. User Dongtian De Shuier said, “today’s medical technology is so advanced. It can even detect something as rare as a menstrual disorder in a man.” Another user Sen Ma drew comparisons with another recent story about a woman being told by a hospital in Shenzhen that her prostate is normal:  ”We truly live in an age of endless possibilities.”

China’s health care system has come in for heavy criticism in recent months. When Wang Hao, a young doctor, was murdered by a patient in March, an online poll by The People’s Daily found that 65 percent of respondents were happy about the news. Retired American businessman and Vietnam War veteran Charles Kirtley described his experience in Peking University Hospital in Shenzhen as one which made him feel that patients were “at the bottom of the hospital’s hierarchy.” 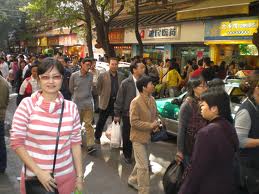 Shoppers are happy, at least. (Photo from allycheang.com)

We like these happiness surveys in China that seem to come out every few months. Usually, they aim to figure out who’s the happiest in China based on city.  The survey that came out this week, however, took a closer look at happiness in relation to income.  And we highly doubt anybody will be surprised by the results.

What made people unhappy differed in the three cities, however:

Beijingers were the least satisfied with their individual income, public transportation and health care. Residents of Shanghai and Guangzhou said they were the most discontent with health care.

No doubt transportation is a horrific problem in Beijing (did nobody mention air pollution?), but it’s interesting to see that healthcare is a problem for many in Guangzhou.

The survey results aren’t exactly unexpected, but they are still problematic for policymakers: poor people aren’t happy, and there are a lot more poor people in China than rich ones.

That wealth gap and polarization of the high and low income groups will need to be addressed soon.  Wang Wenjun, the Executive Director of the Guangzhou Public Opinion Research Center, said ”The indexes of the survey were designed to study the feelings of individuals. But the need to improve public services is urgent.”