Ask a Chinese person what they consider to be the greatest period in their country’s history, and there is a very good chance they will say The Tang Dynasty (618-907). So exalted is this dynasty that “唐人街” (lit. Tang People’s Street) has long been a synonym for a Chinatown. There are many reasons for this adulation. 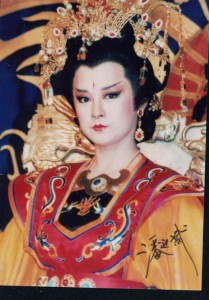 A depiction of Empress Wu Zetian, via Google Images

The introduction of The Imperial Examination during the preceding Sui Dynasty (581-618 AD) saw an educated class of officials oversee a relatively enlightened Confucian system of government. Intelligent military policies meant that the Tang was respected and feared throughout the region. It is also considered the greatest period for Chinese poetry with Li Bai, Du Fu and Wang Wei all living at this time. It was even one of the better periods in which to be a woman, or at least an urban woman, the most famous example being Wu Zetian who rose from concubine to empress.

Despite international trade that saw an increased population of settlers from overseas, other facts show that this period was not as civilized and rational as some would like to believe. The Tang was severely weakened by the An Lushan Rebellion (755-763) which by some measures is the bloodiest war of all time considering the percentage of the human population that perished.

The Tang later fell in the aftermath of the unsuccessful Huang Chao Rebellion (874-884). During this rebellion, the forces of rebel leader Huang Chao attacked Guangzhou and massacred the foreign settlers, with some estimates putting the death toll as high as 200,000. The story of how the foreign community became so large and why these foreigners were so resented goes back to the early Tang.

Foreigners during the Tang Dynasty

Guangzhou’s Huaisheng Mosque is said in an old Chinese manuscript to have been built in 627 AD. This would make it one of the oldest mosques in the world, though it is questionable as to whether Muhammad’s maternal uncle Sa’d ibn Abi Waqqas – who is alleged to have built it – ever visited China. 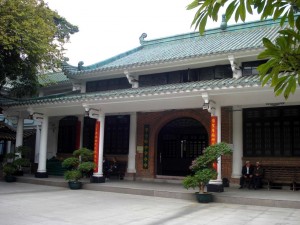 The Huaisheng Mosque, via Google Images

The mosque may not be as old as the manuscript suggests, but scholars are satisfied that it was functional by the beginning of the Song Dynasty (960-1279) at the latest and was rebuilt in 1350 and again in 1695 after being destroyed by fires.

Like the other earliest mosques in China, it was built for the growing number of Arab and Persian settlers. By the time of the Tang Dynasty, Guangzhou was a major port with a direct route connecting it to the Middle East. A Chinese prisoner, who was captured in the Battle of Talas and held in Iraq for twelve years, is said to have returned to China by ship on a direct route to Guangzhou. Due to thriving trade, Guangzhou is estimated to have had a population of 100,000 foreigners by the beginning of the 9th century.

The majority of these foreigners were Persians and Arabs who came to trade. In spite of the mosques being constructed at the time, there is little sign that the earliest settlers were interested in evangelizing. Islam played no part in the Great Anti-Buddhist Persecution which reached its height in 845 and was not considered important enough to be mentioned in the edict.

Accounts from the periods of both the An Lushan Rebellion and the Huang Chao rebellion suggest that, being there solely to trade, these foreigners tended to do well for themselves. And as Harvard psychologist Steven Pinker points out in his 2011 doorstopper “The Better Angels of Our Nature,” when a minority group is doing noticeably well economically such as Chinese in Indonesia or Jews in the United States, this can lead to resentment.

This resentment would not have been decreased by an incident which took place in Guangzhou at the height of the An Lushan Rebellion in 758. Arab and Persian pirates who had probably based themselves on Hainan Island raided and pillaged Guangzhou, looting warehouses and causing unwanted headaches for the new Tang crown prince Li Yun. As a sign of things to come, the wealthy Arab and Persian population of Yangzhou was massacred in 760 by the rebel forces of Tian Shengong.

By the second half of the 9th century the Tang, though still one of the world’s most powerful empires, was manifestly in decline. The neglectful and decadent regime of Emperor Yizong (860-874) and his son Xizong inspired a rebellion led by Wang Xianzhi. One person who would follow Wang and ultimately break away to start a much more widespread rebellion was salt privateer Huang Chao, who became a rebel after failing the Imperial Examination three times. 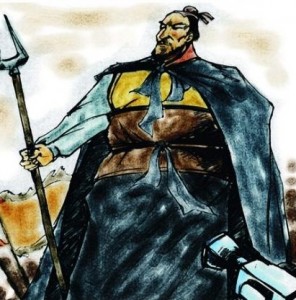 A depiction of Huang Chao, via Baidu Images

In 878, after Wang Xianzhi had died, Huang Chao continued to spread the rebellion which he was now the sole leader of, despite setbacks such as a defeat to the forces of Gao Pian in Jiangsu. Huang Chao subsequently turned south.

Ahead of what would become The Guangzhou Massacre of foreigners, Huang Chao offered to submit to Tang imperial authority if he were made the military governor of Tianping. Instead, he received the “insulting” offer of Imperial Guard General which sparked the attack on Guangzhou in fall 879.

Huang Chao’s rebels slaughtered Jews, Arabs, Persians, and Christians, according to Arab writer Abu Zayd Hasan As-Sirafi. The main motivation behind the massacre, as is asserted in A History of Chinese Civilization by Jacques Gernet, was resentment at the foreigners’ wealth. Abu Zayd Hasan As-Sirafi estimated the death toll to be 120,000 while another author named Mes’udi put it at 200,000.

William J. Bernstein, author of A Splendid Exchange: How Trade Shaped the World, claimed that not content to massacre traders, Huang Chao also tried to kill the Tang’s main export industry by destroying the mulberry groves of south China.

The time they spent in the south saw Huang Chao’s army severely depleted by illness and their rebellion would ultimately fail. The Tang however wouldn’t last for much longer, giving way to the Five Dynasties and Ten Kingdoms Period in 907.

The greatest period of China’s history?

Philip Pan’s “Out of Mao’s Shadow” begins by conceding that, for all of the current regime’s faults, China is by most measures going through the best period in its 5000-year history. It is highly unlikely that there is anything going on culturally nowadays that will be as respected as, say, Tang Dynasty poetry or The Four Great Novels in centuries to come, but the low infant mortality and high life expectancy make it worth it.

Maybe the cultural riches of The Tang Dynasty were a direct result of the horrors of the period. Maybe Orson Welles was on to something when he said: “In Italy, for thirty years under the Borgias, they had warfare, terror, murder and bloodshed – that produced Michelangelo, Leonardo Da Vinci and the Renaissance. In Switzerland, they had brotherly love and five hundred years of democracy and peace, and what did that produce? The cuckoo clock!”

A weekend getaway to sand and sea (and maybe sunshine) without having to fight queues at airport security will soon be possible.

The new 20-stop route will skirt along several major cities along the way, including Huizhou. The line will be a big boost to for travellers.  Shenzhen is a go-to destination for business while Xiamen is popular for its sandy beaches and surrounding views. It’s often seen as an alternative to the hotspot of Hainan Island.

All of this will be possible when trains begin departing from Shenzhen North Station, slashing the existing train time from a whopping 15 hours.

Life of Guangzhou believes the price of a first class ticket between Shenzhen North and Xiamen will be 190 yuan and a standard class fare will be 160 yuan one-way.

In the battle for passengers between airlines and railways (as we reported a few days ago), this new front will put pressure on Shenzhen Airlines, Hainan Airlines, China Southern and it’s subsidiary Xiamen Air, who all fly out of Bao’an Airport. Prices could well be set for a downward trend.

The latest check on September one-way airfares with eLong.com show tickets selling for 550 yuan before taxes and other fees. A man diagnosed with menstrual disorder? It happened in Hainan

The man's report of "irregular menstruation" from a doctor in Hainan.

Questions are being raised about how carefully doctors and nurses are doing their jobs after a man was told by the Central Hospital of Hainan Province that he has a menstrual disorder, according to Hinews.com. Lin Zhou, 25, went to the hospital for a check-up Sunday after feeling uncomfortable, including suffering from an upset stomach. After the check-up, he received a report, on which the clinical diagnosis read “menstrual disorder”.

“I didn’t know whether to laugh or cry,” Lin told Hainan local television. The hospital explained that there was a mix up in its system due to it being a particularly busy day, and said that the doctor responsible would be disciplined.

Tang Zhi, who is in charge of safety at the hospital, explained that Lin’s report had been mixed up with that of a woman named Lin Ying. The hospital pledged to prevent any such mistakes from being made again.

The news has gone viral on Sina Weibo. User Dongtian De Shuier said, “today’s medical technology is so advanced. It can even detect something as rare as a menstrual disorder in a man.” Another user Sen Ma drew comparisons with another recent story about a woman being told by a hospital in Shenzhen that her prostate is normal:  ”We truly live in an age of endless possibilities.”

China’s health care system has come in for heavy criticism in recent months. When Wang Hao, a young doctor, was murdered by a patient in March, an online poll by The People’s Daily found that 65 percent of respondents were happy about the news. Retired American businessman and Vietnam War veteran Charles Kirtley described his experience in Peking University Hospital in Shenzhen as one which made him feel that patients were “at the bottom of the hospital’s hierarchy.”