Guangzhou, Foshan, and Zhaoqing to crack down on foreigners

Watch out, laowai. Guangzhou, Foshan and Zhaoqing are planning to introduce a mechanism to manage foreigners living in the three cities, Chinese state news portal China News reported on February 21.

The report said the mechanism will specifically target sanfei foreigners, or “three illegals”, referring to three groups of foreigners who illegally enter, stay or work in China. The three cities will standardize visa application procedures and jointly carry out enforcement against the groups, it added. Details of the mechanism, however, were not disclosed in the report.

The campaign to weed out sanfei foreigners is not a novelty in China. It first caught national attention in Beijing in 2012 when the capital police force announced a massive clean-up of the “three illegals” after a video surfaced showing a British man being beaten up by several Chinese for allegedly sexually assaulting a woman in public in Beijing.

The campaign, however, could turn into a fiasco indulging xenophobia and nationalism that fuels more rants by CCTV Dialogue host Yang Rui.

According to Chinese law, foreigners who enter China or remain in China illegally could be detained, monitored or deported by any police bureau at or above the county level. A foreigner who illegally enters China could also face a fine between RMB1,000 ($164) and RMB10,000 ($1,640). 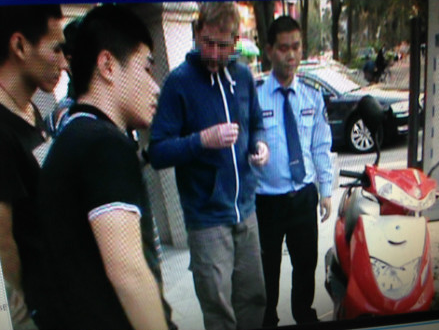 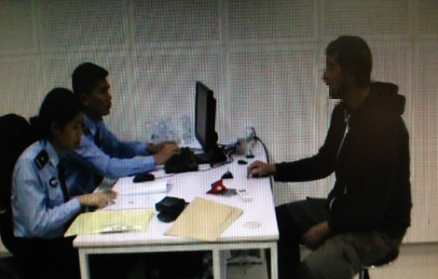 Shenzhen cracks down on jaywalking and other traffic-related mishaps

It may resemble running up a down escalator but traffic police are trying to crack down on violations on various rules of the road throughout the PRD.

A man being caught jaywalking, courtesy of Nandu Daily

A new regulation in Shenzhen stipulates that jaywalkers can be fined up to 100 yuan as of May 23, Shenzhen Daily reports.

Traffic police spokesperson Li Guangqun said violators will be held for further investigation if they don’t cooperate with police, and could be detained or face criminal charges if they resist with violence.

Violators will be able to pay fines at the scene or through local banks.

Those who don’t pay fines within 15 days will be assessed an overdue-payment surcharge of 3 percent per day, up to the amount of the original fine.

However, jaywalking is just one of many traffic offenses that are hard to stamp out.

China has been cracking down on drink driving since 2011 but the problem persists. A Singaporean has been detained for two months, issued with a 3,000 yuan fine and banned from driving for five months after injuring two people while driving drunk in Zhuhai last year, Southern Metropolis Daily reports.

The man, Lee, pleaded guilty to the offense, committed in Xiangzhou District in September and said he was deeply sorry as he was sentenced on Monday. He was also ordered to pay 60,000 yuan in compensation to those he injured.

Zhuhai is also cracking down on people who throw litter from their cars. A bus driver who discarded litter from his vehicle while waiting at a red light on April 20 has been fined 100 yuan and docked 2 license points, Southern Metropolis Daily reports.

The driver, Mr Luo, was reported by a passenger who caught the incident on his cameraphone at the traffic light at the intersection of Gangwan Boulevard and Jinfeng Road. The bus company has also been ordered to educate Luo, who was travelling from Tangjiawan to Jinding when the incident occured.

Another phenomenon commonly seen on China’s roads is that of overloaded motorcycles. One such case ended in tragedy in Huizhou on Monday. The driver was killed, two were seriously injured and three sustained minor injuries when a three-wheeled motorcycle carrying seven people hit a road-lamp in Huicheng District ata round 7:30 p.m., Nandu Daily reports.

The driver, Shi, 40, was a migrant worker from Jiangxi and he and his passengers had just clocked off. He had not been drinking.