Attention ladies: A&F models have been flown in for HK store opening

A hundred-strong army of semi-naked models lined Pedder Street and the steps of Abercrombie & Fitch in Hong Kong today as the US retailer kicked off the countdown to the opening of their first China store on August 11.

Excitable shoppers got a taste of things to come, and even luckier ones were snapped surrounded by the well defined models who’ve travelled the globe to mark the opening.

Traffic on Pedder Street temporarily ground to a halt as vast numbers of people rushed across to grab a photo outside Abercrombie’s new, flagship store.

For those who missed their chance to get a picture with A&F’s official models, they’ll be out and about in Hong Kong in the lead-up to the official opening inside open-top buses.

Check out our Nanfang Studio album of today’s events at Abercrombie & Fitch.

Hong Kong’s US retail invasion: J. Crew next to move in 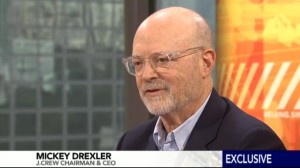 One of the big benefits of living in the PRD is having access to all that Hong Kong offers just south of the border. While those in Shanghai and Beijing get their “authentic” China experiences, we’re fortunate to get the best of China where we live with the added convenience of having access to the foreign retail chains in Hong Kong, cheap electronics, and even a wide selection of books unavailable on the mainland.  (Not to mention fast and unfettered Internet when it’s needed).

For those that like to head south to pick up items unavailable up here, you’re going to like this: US fashion retail icon J. Crew is moving in.  The brand – adored by the likes of First Lady Michelle Obama – is now scouring Hong Kong looking for a place to open a flagship store.

J. Crew won’t be the first US chain to open in the territory, either.  The city has seen a US retail invasion over the past few years with the Gap having opened in Central and Abercrombie and Fitch set to open on Pedder Street on August 11.  J. Crew has over 200 retail stores in the US and Canada and believes entering Asia through Hong Kong – which is seen as a mature market – is a stepping stone to further growth in China.  After all, Hong Kong has a strong combination of local consumers and 42 million tourists, including 28 million mainland visitors.

J. Crew chairman and CEO Mickey Drexler told Bloomberg today: “You must be in Hong Kong, you must be in Shanghai and… We need to grow quickly.”

While western brands are moving in, there are signs of a spending slowdown in Hong Kong. Figures for October 2011 showed growth of 23 per cent, but in May 2012 it tumbled to 5.8 per cent, the slowest pace of growth for 18 months.

There’s no word on when the new J. Crew store will open.

Update on store opening at the bottom of the article

The naked torsos of Abercrombie and Fitch (A+F) models are coming to Hong Kong this August. With their sex-appeal making the American fashion retailer famous worldwide, Hong Kong will be the first flagship store in the greater China market.

The move is part of a bigger effort to expand their international presence outside America. New flagship stores are opening over in Munich, Germany and in South Asia, Singapore is the only recent beneficiary of the latest store openings.

Abercrombie and Fitch on the lookout for "models"

Last August, A+F’s sister brand Hollister made its first foray into the Pearl River Delta, opening a flagship store in Hong Kong’s Festival Walk, while at the start of the year, in downtown Shenzhen, it opened its doors to customers in the MixC shopping mall.

Recruitment for “models” is well underway for the soon-to-be-based Pedder Street retailer in Central district.

A “model” recruiter for A+F reckons the store will open on August 27.
—–
Abercrombie and Fitch have published long-awaited details on the opening date of their new Hong Kong store.