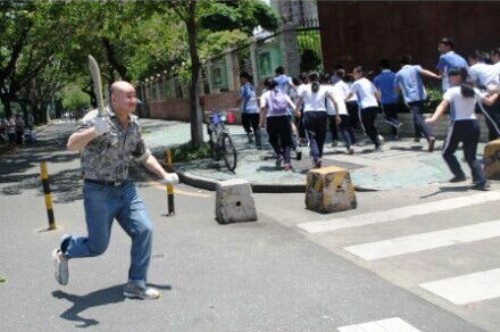 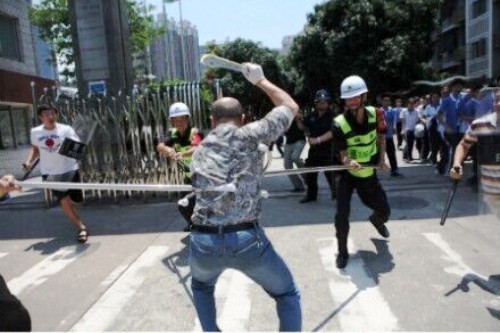 A farmer from Hunan Province turned himself in Monday after a citywide manhunt was conducted in Guangzhou over the weekend following his threats to attack schools in the city, Shenzhen Daily reports.

Last month, 22 children were wounded in a knife attack on a school in Henan Province, raising concerns about the safety of school children in China.

Guangzhou police said the suspect, Cao Zaifa, was unhappy about the demolition of his home and the seizure of his land by the government in Hunan’s Rucheng County. He sent a text message to the county’s police chief Friday, threatening bloody violence in Guangzhou’s kindergartens and at Sun Yat-sen University.

Rucheng is near the border between Guangdong and Hunan. Police say Cao came down solely to commit the act and he turned himself in 6:50 p.m. Monday.

Wanted posters with Cao’s photograph had been posted in many residential neighborhoods.

Although his actions have caused outrage, some people have sympathised with his plight.

Land grabs have been a major source of public anger during the years of China’s breakneck development and the victims are invariably society’s most powerless people. Philip Pan’s “Out of Mao’s Shadow” gives this explanation as to how they work:

Naturally, developers sought to boost profits by paying the residents they evicted as little as possible in compensation. Private homeowners presented the biggest problem, because they could demand a market price or even refuse to sell. In reality, though, local officials often approved projects and sold land-use rights to developers without going through the trouble of buying or seizing them from homeowners first. Officials then conspired with developers to pressure owners to give up their land. Developers often hired thugs to intimidate residents while police looked the other way, and local authorities sometimes, cut off water, electricity, or heat to the holdouts. If necessary, the government intervened on behalf of developers and ordered a forced eviction on questionable legal grounds. Altogether, between 1991 and 2003, more than half a million families in Beijing were evicted by developers.

A cop outside a schoolgate in Guangzhou

As one netizen put it: “What legal channels did Cao have to go through?”