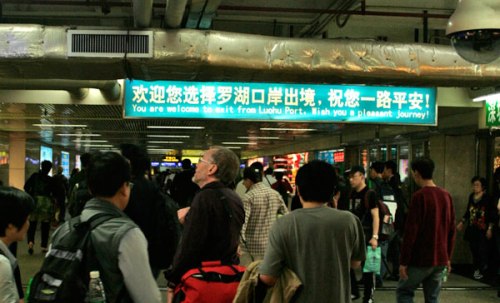 Mainland tourists: your days of peeing on the streets and eating in the subways of Hong Kong may be numbered. A proposal has been made to the Commission on Strategic Development to reduce the number of Mainland visitors allowed into Hong Kong by 20%, reports the SCMP.

Tensions with Mainland visitors has finally drawn the attention of Hong Kong’s lawmakers. Years of “locust” references, pee controversies, subway fights, and retail favoritism have recently culminated in Hong Kong street demonstrations that have called on the government to close the border to the north.

And what do you know: it seems like demonstrations do work. Chief Executive Leung Chun-ying said the government is interested in listening to “the views of the public, businesses and the tourism sector”, an overall sentiment that has coalesced into this proposal to deny entry to eight million mainland visitors.

And to ensure that the process of governing is working properly, lawmakers disagreed. One unidentified member of the council said, “Everyone [is] opposed [to] such a drastic cut,” while Ben Chan Han-pan voiced his doubt that individual mainland visitors under the plan in question are the source of the problem.

Local tourism may suffer if the proposal goes through. First to be affected will be luxury stores that employ guys with white gloves who follow you around the store until you leave.

Since Hong Kong lawmakers are debating the will of the people, we can’t wait until this contentious issue is boiled down to this: Are crude manners tolerable in order to accept mainlander money, or will an adherence to introverted regionalism in fact stagnate Hong Kong’s progress?

A crackdown on illegal foreign workers in China has spread to the Guangzhou fashion industry as an undisclosed number of models have been apprehended by police, reports Fashion Times.

The crackdown appears to have first been initiated in Beijing where an undercover sting operation at the M3 modelling agency in Jianwai SOHO resulted in some 60 models being in “custody”, while another four were “jailed”.

Entrapped by a feeling of desperation, Fashion Times reports that extreme measures have been taken up by models in Guangzhou after those in custody gave up contact information for other models:

Models have reportedly advised others not to answer their phones, not to answer their doors to strangers and to keep their lights off at night. Models have also been advised to hide their portfolios and comp cards.
According to Fashionista, some models have been moved to hotels and were told to act as if they are tourists, while others have been relocated to Hong Kong, where it is easier to obtain a work permit. Foreigners that look like models are also being stopped and asked to show work papers.

Foreign models are allowed to work in China, but only through the use of an entertainment visa. As tourist visas are much easier to procure, a “grey area” sometimes happens in China through which a foreign model can work without the proper certification.

We advise all models in the Guangzhou area to exercise caution, and remember: never let them see you sweat.

Earlier this year, we told you about Guangzhou’s plans to introduce 72-hour visa free stays at Baiyun Airport for inbound visitors. The plan however did not include a date… until now. According to the Global Times, the policy comes into effect as of August 1st, or this coming Thursday. That would make Guangzhou only the third city after Beijing and Shanghai to offer such an arrangement.

There are two main restrictions: first, the visas are only available to a select 45 nations (as is the case in Beijing and Shanghai): 31 from Europe, six from North and South America,six from Asia, and two Oceanic countries. One notable exception from the list is Norway, whose diplomatic relations with China have been somewhat frosty since the Country’s Nobel committee awarded Chinese dissident Liu Xiaobo the Nobel Peace Prize.

The second caveat is that, although visitors are free to go where they like over the 72-hours, at the end of their stay, they must exit from Baiyun Airport.

So, after Beijing and Shanghai, why was Guangzhou chosen? According to the deputy governor of Guangdong, Zhao Yufang, the answer is simple: development, and tourism.

The launch of this policy paves the way for transforming Guangzhou into an international aviation hub, promotes the inbound tourist industry and helps the city become a key metropolis in the country.

Let’s help Zhao Yufang get his wish. If you happen to know someone from the list of 45 countries, tell them to come on down… for 72 hours.