Dongguan blue collar workers have long since struggled with the city’s ever increasing cost of living, however even higher paid white collar workers are starting to feel the pinch. After one white collar worker in the city posted a full list of his budgetary expenses and claimed he could hardly make ends meet with his RMB 10,000 monthly salary, he quickly discovered he wasn’t alone. The post has since sparked spirited discussions online and resonated with many fellow workers in the city.

Any job that pays RMB 10,000/month in Dongguan is a high-paying gig given that the city’s average annual salary for a private sector worker is only RMB 37,020 per year, or RMB 3,080 a month but that hasn’t stopped some residents suggesting 10K just isn’t enough to get by these days.

The user, who works as a senior financial consultant, wrote in his post that his actual income after deducting social security funds, individual income tax and CPF is only RMB 7,457. Then of course there are his monthly expenses: a housing mortgage of RMB 3,000; electricity, gas, Internet, and TV cable fees totalling RMB 300; car maintenance that comes to RMB 1,370; fruit and snacks costing RMB 300; and mobile charges that amount to RMB 100. After expenses, all he is left with each month is RMB 977.3.

But these calculations were considered minimal by some. One user commented that if the additional costs of children’s milk formula, education fees and medical charges were also included, such a monthly salary wouldn’t be enough.

According to a survey conducted by Guangzhou Daily among 20 white collar workers, about 80% of respondents revealed that rent and housing mortgages are the biggest expenses each month.

It seems the Public Security Bureau isn’t playing around anymore when it comes to proper work permits. 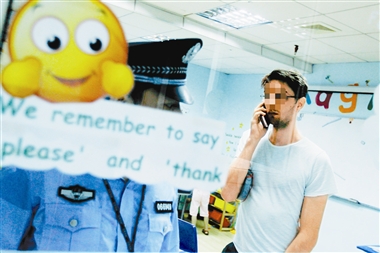 One of the foreigners suspected of working illegally. (Shenzhen Daily)

The Shenzhen Daily is reporting today that “several” foreigners were arrested at English-training schools in Nanshan District, home of Shekou and a large population of foreign residents. The arrested teachers were apparently “taken away” by the PSB’s Nanshan District Sub-bureau for “illegal employment”:

The bureau did not reveal how many foreigners had been arrested or give further details as investigations into the cases are still continuing.

At present, there are about 13,000 foreign residents living in Nanshan District, accounting for 42 percent of the expatriate population in the city.

According to the Shenzhen Administration of Foreign Experts, about 11,000 foreigners with valid work permits were employed in Shenzhen last year, accounting for about 60 percent of the city’s foreign-worker population.

As always, the city is reminding foreigners they must hold valid teaching certificates and proper work visas to be employed in Shenzhen. No word on what kind of punishment these teachers may be in for.

China is starting to take the issue of visas and work permits a little more seriously after some convicted criminals from overseas have found their way into teaching positions at Chinese schools.