Six year-old A Ping sustained serious head injuries when she was hit by a truck outside her school gate on Friday May 3. She has yet to be told that her grandmother who was picking her up at the primary school in Shenzhen’s Longgang District. 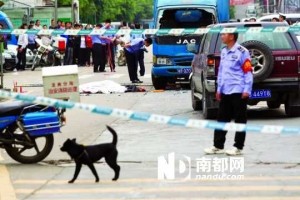 Two people, both grandmothers of students, were killed. Three students were injured. The cause is being investigated.

Aiai Primary School is located in Sheung Shui Keng Community in Longgang, a typical urban village. It is common there for grandparents to pick up kids from school while their parents work. The 62 year-old He Zhengping had just picked up her grandson when she was walking through the crowd of elderly people and their grandchildren. She suddenly heard a scream and turned around to see a blue truck had lost control and hit some people near the school gate.

When two male teachers and the school’s doctor, surnamed Zhou ran to the scene they saw three children lying amid the broken glass and two old women trapped under the vehicle. Both were dead when the ambulance arrived.

The driver, Mr. Chen, 20, claimed that the truck experienced brake failure. He tried to steer it into a heap of garbage near the school gate but the steering wheel also failed. Traffic police are investigating.