After much dithering, construction on the HK-Macau bridge is about to start 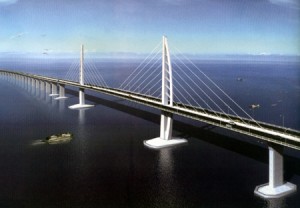 It’s one of the key differences between life on this side of the line, and in one of the SARs: stuff just gets done faster here. Sure, sometimes bulldozers have to move in before people have had a chance to leave their homes, but that’s the price one has to pay for progress, right? Or China would like us to think.

Anyway, life is much different in Hong Kong where environmental impact studies and feasibility studies need to be completed before any major infrastructure project gets off the ground. Even then, it’s subject to lawsuits if people feel they weren’t properly consulted. That’s what has happened to the HK-Macau-Zhuhai bridge over the past few years, as one women in Tung Chung, a suburb of Hong Kong, complained that the bridge would have a negative environmental impact on her community.

That’s all been put to bed though, and after humming and hawing over the start date, it’s been announced the land reclamation will start before the end of this year. This, after the Hong Kong government had to pony up an additional HK$48 million for the project:

“This reflects the people’s wishes that such large-scale infrastructure projects should begin and not be repeatedly delayed,” said Eva Cheng, Hong Kong’s secretary for transport and housing, after the decision. “It will enhance Hong Kong’s competitiveness and create employment.”

“We will start work before the end of this year. And then we will try our best to compress the programme. The target right now is to complete these facilities in line with the Main Bridge completion date of 2016,” Cheng said.

So what does this mean? Well, in 2016 you could theoretically live in Zhuhai and commute to work in Hong Kong by car, or vice versa. It’s another key part of joining the various cities of the Pearl River Delta.

One wonders just how much that toll will be, though.