Beijing airport bomber is an aggrieved chengguan victim from Dongguan 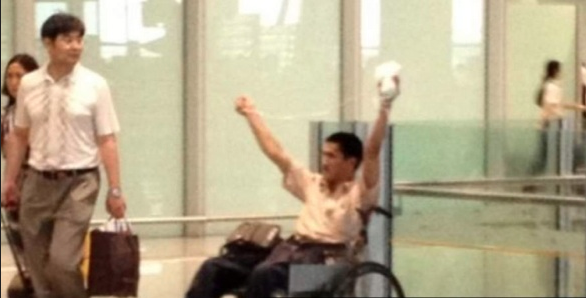 Ji is said to have urged people to stay away from him because he had a bomb, courtesy of Google Images

In case you missed it, the big story over the weekend was about a disabled man who detonated a bomb at Beijing Airport’s Terminal 3 arrivals hall to protest his treatment at the hands of Chengguan, or urban administrators.  It has since turned out that he hails from Dongguan.

Ji Zhongxing, 34, claimed on his now harmonized (censored) blog that he had been the victim of an unprovoked beating by Chengguan in Guangdong Province in 2005 and had never been able to get justice, Shanghaiist reports.

Ji migrated from his native Shandong Province to Dongguan where he ran an unlicensed motorcycle taxi business. His world was turned upside down in 2005 when he and a friend named Gong Tao were beaten by a gang of Chengguan with metal pipes outside of the Xintang Public Security Building in what he claims was an unprovoked attack. He has been in a wheelchair ever since.

Shanghaiist translated some of what he had to say about his failure to find justice:

Because we are farmers, and are poor, no matter who we turn to, nobody wants to help us. And what’s more, when the chengguan found us, they turned around and called us tramps and beat us. If it weren’t for them taking us to hospital on time, I wouldn’t have survived…

We looked to the sky, and the sky looked away; we called to the earth, and the earth did not respond. We have been forsaken but have nobody to turn to, so all I could do was to hold back tears and go back to Shandong. And now I am festering away, paralysed and over 100,000 yuan in debt. Our family have suffered an unimaginable fate. My uncle died when he was young, and soon after so did my mother and grandmother. The only thing that’s keeping me going is the thought of seeking justice.

Nobody other than Ji was hurt in the blast at Terminal 3 and the extent of his injuries are not known, according to the BBC.

This is the second  case of abuse by Chengguan to emerge in the past week. There has also been a nationwide outcry after a watermelon seller in Hunan was killed during a spat with Chengguan. Six of them have been detained. Controversial public intellectual Li Chengpeng (who we’ve told you about before) had this to say about Chengguan in this hard-hitting essay:

In my dear motherland, every brand-new street has seen the brutality of urban management officers. How dare you say you have lived in cities, if you had not witnessed such incidents? Over time, we have become desensitised. But if you insist on looking for an ironic twist, look no further than the dead body of the watermelon vendor. Above it, a sign reads “A Model Street for Urban Management.” It is a model to show to all of you.

Li has allegedly since been gagged.