Two years ago, South Korean electronics giant, Samsung Electronics Co. was accused of exploiting child labour in several of its Chinese supply factories. Samsung is once again embroiled in labour scandal and unrest as workers from one of its Dongguan supply factories has gone on strike, demanding higher salaries and better social insurance.

Net Ease Finance reported on March 30 that a large-scale worker strike took place on March 29 in Samkwang Science & Technology Co. The company has more than 1,000 employees and manufactures mobile phones and DVD players for Samsung.

One of the workers on strike told the news portal that the Dongguan company deducts RMB 80 (or 8%) from a seasoned worker’s monthly RMB 1,000 salary for social insurance, which the worker claimed to be a large share, the report said.

The report did not specify how many workers participated in the strike and there was no comment from the Dongguan company or Samsung.

Here is a photo of the strike scene from Net Ease: 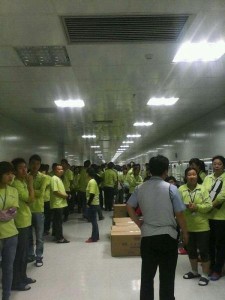