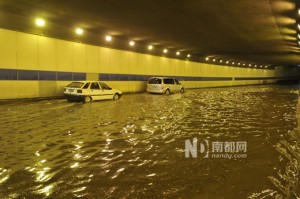 Vehicles in a tunnel caught in the rain which began around 6:30 p.m.

Any hopes that the Pearl River Delta had seen the worst of the recent heavy rain proved unfounded on Saturday April 20.

The drainage system in Guangzhou’s downtown area has proved inadequate not for the first time after the streets were heavily flooded after an orange storm alert warning preceded around 3 hours of heavy rain on the evening of April 20, Southern Metropolis Daily reports.

Areas that were particularly badly affected include Huangpu Road toll station and Tianhe City Shopping Centre. But there were several other roads and tunnels in the city where the flooding, which has now been mostly cleared, reached over a meter.

A woman caught in the storm on Shiyou Lane, snapped by someone who had nothing better to do than take her picture, a wet t-shirt fetishist perhaps.

The city has pledged to upgrade its drainage system to prevent the same thing from happening again. The tunnel will be 30 to 40 kilometres underground and around 100 kilometres long. Five metres in diameter, the tunnel will cost a total of 250 billion yuan, Bendibao reports.

The Guangzhou Municipal Sewage Treatment Liability Company pledged to have professional structural engineers assess whether the project would pose a danger to nearby housing. 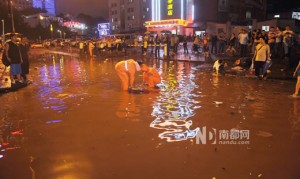 On a lighter note, the weather is expected to get better this week.