A man was rescued by police in a zoo in Shaoguan City on January 19 after a bizarre suicide attempt which followed even more bizarre behaviour, Shenzhen Satellite Television reports.

The man, Li, 27, from Yunnan Province, attacked an ostrich in the zoo and bit it to death in front of onlookers who included children and elderly people. He then slashed his wrists as police were called.

Xu Jianwen, deputy head of Datang Road police station told reporters that when he arrived at the scene, Li was highly excitable and simulated firing a gun at the policemen. He was already covered in blood when police arrived.

As he began to lose strength, Li lay on the ostrich’s corpse like a pillow before police approached him tentatively. He offered little resistance before police dragged him away.

He was rushed to hospital where his condition soon stabilized. However, that night, his condition worsened and he was returned to hospital. He appears to be out of the woods now. A suicide note was found on his person. The note urged his parents to have a good life, saying there was no need to worry about him anymore.

Li works as a security guard and has been described by colleagues as an introvert who is unusually quiet when at work. He was also described as being straight-forward. 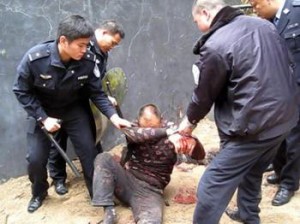 Police drag a bleeding Li away from the ostrich’s corpse

The name of his company was not revealed to media.

Whether this was a genuine attempted suicide or a cry for help, I think we can all agree: the man needs help.

Li claims to have no recollection of the incident. The investigation is ongoing.

Angry At The Local Government, Buddhist Monastery in Yunnan Closes