Despite a brief respite from the storm yesterday, the forecast calls for more rain to fall on the Pearl River Delta for an additional seven days as Shenzhen tries to deal with the aftermath of its flooding disaster.

As a direct result of the torrential rain that fell on Southern China from May 8-12, Shenzhen has suffered an economic loss of more than RMB 80 million with a total of 25,531 residents affected by the flooding, reports Yangcheng Evening News.

Furthermore, it is reported a total of 2,986 people have been relocated, 10 houses have collapsed, and some 11.97 thousand square kilometers of crops have been destroyed.

A landslide occurred next to the Zhuguang Society Chuanbao Building on Taoyuan Street in Nanshan District in which 100 people were relocated.

Elsewhere, some 230 people were relocated when a low-lying area at Pinghu Street and Bantian Street in Longgang District became flooded.

Rain is expected to continue until May 19, with heavy showers giving way to moderate showers.

Service on the Guangzhou-Shenzhen high-speed railway resumed normal operations as of May 12.

Other Guangdong cities hit hard by the rainstorm include Zhongshan and Jiangmen, as have the provinces of Hunan and Jiangxi, leading to some half a million people stricken by the disaster. 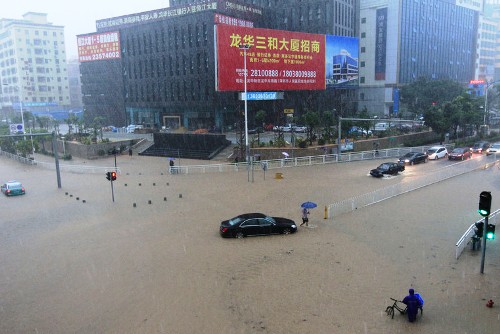