Two Dead, One Missing as Dongguan Teens Swept Away by Floodwaters 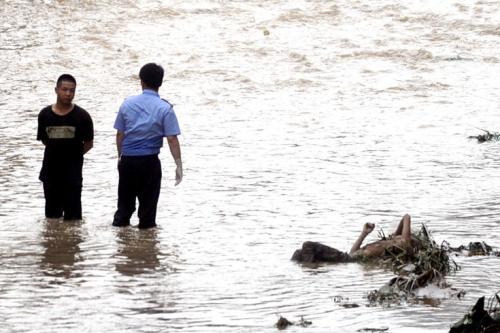 The flood-stricken area of Tangxia County, Dongguan is the fatal scene where three youths were swept away in a flooded creek swollen with rainwater, leaving two dead and one missing, reports Nandu.

At approximately 5pm on May 11, eight young adults were crossing a flooded creek together by linking arms near the City Ring Road West at Keyuan Station when three of them were suddenly swept away by the strong current.

Lao Huagui, one of the people that attempted to cross the creek, recalls the incident:

“The water reached up to my waist,” said Lao, who stands at 1.7 meters tall. “We were all walking in the middle of the street, when all of a sudden a great current rushed in from the right side, and the water surged up. With that, the floodwater submerged the shortest one of us, He Sihan. The eight of us then became scattered.”

At that time, the creek [was so high it] submerged both ends of the railings of the bridge. Seeing that He Sihan was caught up by the current, Liu Dejin and Cai Jiahong both hurried to grab He out of the water, but they weren’t able to catch him. Both of them were also washed away by the current.

The other five remaining people were able to extract themselves from the flooded creek by managing to hold onto trees at the side, or by climbing the surrounding walls of the embankment.

By noon of May 12, the floodwater had subsided. At that time, two bodies were found.

Dead are Liu Dejin and Cai Jiahong. The third victim swept away by the flooded creek, He Sihan, has still not been found.