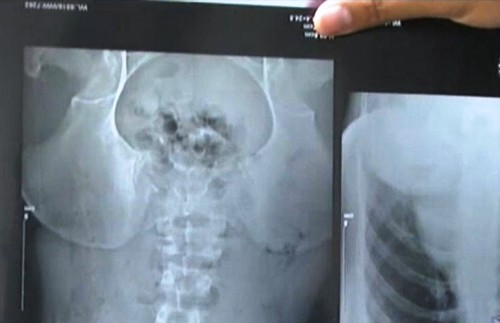 While Guangdong has been singing the praises of the recent crackdown on the sex trade, which has seen over 3,000 arrests since February, one Shenzhen massage parlor has been accused of openly encouraging it.

A 24 year-old woman named Xiao Yan who worked at the Golden Beach Club, a massage parlor in Bao’an District, was hospitalized with several tissue injuries following her refusal to provide “special services” to a client, Guangdong TV reported on June 23. Xiao Yan’s troubles started two months ago when she was lured to the club by its hefty promise of RMB 10,000 in salary per month. The reality was something quite different, with Xiao Yan earning an average of only RMB 3,000 per month.

However, wage concerns were not her only issue. Among the list of services Xiao was expected to provide were sexual favors. “Some clients requested that we massage them with our breasts. (The club) asked us to massage clients’ genitals, and would give us a monthly salary for doing so. Many clients would be naked and ask to touch us, or even request we use our mouth,” Xiao Yan told the newspaper. 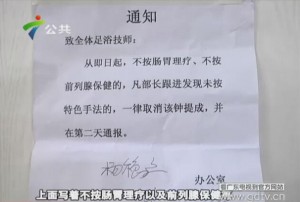 The notice allegedly issued by the club instructs its employees to use “special massaging techniques” on clients.

A signed notice, allegedly issued by the club, emphasized that if an employee doesn’t use “special massaging techniques” on clients, her bonus will be revoked, and the masseuse will be disciplined.

The club, however, fervently denies involvement in any illegal sexual services and claims that Xiao Yan initiated the attack on her supervisor, and that he was merely defending himself. Some female masseuses at the club interviewed by the newspaper denied that any sex is offered by the employees and insisted all services are strictly legitimate and non-sexual.

READ: Foshan Court Rules that Happy Ending Massages
Do Not Amount to Prostitution

It’s no secret that some high-powered officials have been actively shielding the sex trade business from prosecution. Since the province’s vice crackdown, Dongguan’s police chief has been sacked and, just recently, two local police chiefs were arrested for providing protection to the industry.

While it remains to be seen what really happened at the Golden Beach Club, the story has provoked many comments following its publication. By the end of June 23, it had attracted over 2,500 comments on QQ alone.

Most commentators asked Xiao Yan to quickly leave the city for fear of retribution. Aya wrote: “For your personal safety, I suggest you to leave as soon as possible. In regards to yellow (sex trade operators), black (underground organised gangs) and protection rackets, we ordinary people can’t mess with them.”