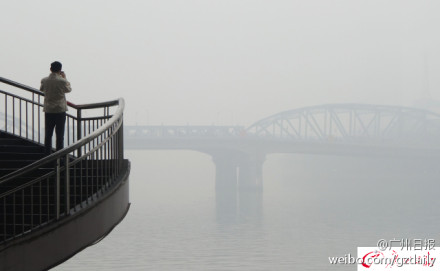 Even when Guangzhou was blanketed by grey, toxic smog, a meteorology expert still maintains the city is covered by fog, not smog, Yangcheng Evening News reported.

The “polluted fog”, as the meteorologist Wu Dui calls it, is formed when polluted airborne particles expand upon contact with dense moisture.

But the question is will the polluted fog be less hazardous than smog? Rest assured that you are still breathing in and breathing out the same heavily polluted air. The polluted fog contains all the toxics one could find in smog, only more humid, the report said.

And it’s getting worse. On Wednesday, many cities in Guangdong have raised the “fog” alert. At 4:00pm, Guangzhou’s visibility was less than 100 meters, according to readings from a local meteorology station.

Exposure to polluted air not only raises the risks of respiratory diseases, it is also affecting one’s mental health, giving rise to mood swings, depressions, said one psychiatrist from a hospital affiliated with Jinan University in Guangdong.

In rare cases, the poisonous smog will trigger suicidal thoughts among people with a mental illness history, the psychiatrist said.