Single employees of an LED company in Shenzhen were given the day off to find love on Chinese Valentine’s Day, known colloquially as Qixi, which fell yesterday, The Daily Sunshine reported on its microblog.

Here is The Nanfang’s translation of the below notice:

Shenzhen RISIP Company would like to announce ahead of Chinese Valentine’s Day：All single members of staff can have a paid day off to declare their love to someone. Those who succeed will get a 1,000 yuan cash bonus.

Also, the CEO will personally give rings to each of the new lovebirds. Those who attempt to cheat will have their heads shaven and be forced to work overtime on Sundays for two months.

Married employees, do whatever you must. But even a gesture such as that is destined to encounter some cynicism. One netizen wrote: “Clever boss, for a small amount of money he gets a big advertisement.”

This company is just one of many examples of people marking the festival in a creative way.

According to Travel China Guide, different regions have different customs, but wherever you go you will find plenty of people celebrating the festival in not so customary ways. Below is an image from last year’s Qixi of couples marking their wedding day on a roller coaster at Shenzhen’s Happy Valley. Twelve couples did the same yesterday, according to Shenzhen Daily’s microblog. 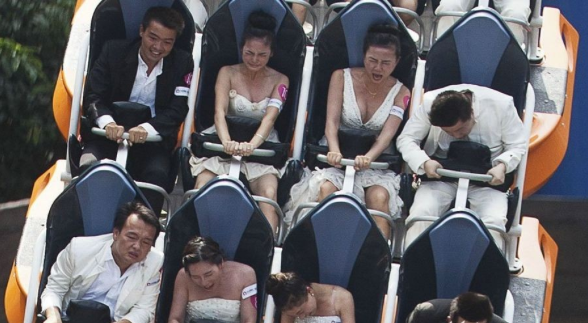 Let’s hope their marriages are less of a roller coaster, image courtesy of Nandu Daily