Well, that didn’t take long: On the same day that an announcement confirmed the Guangzhou Evergrande Football Team will now be called “Evergrande Taobao”, people took to the internet to voice their outrage at the awkward moniker.

The renaming of the team revealed Friday by Jack Ma and Xu Jiayin combined two very popular name brands together: the “Evergrande” football club and the “Taobao” e-commerce website portal. However, the point of contention for netizens is with the abbreviation of this name.*

It turns out that one nickname of “Evergrande Taobao” in Chinese can be the term “Great Treasure”, a term with positive connotations until you realize that the Chinese name Dabao is already an established brand name in China—for a cosmetics line.

Such a small detail may seem insignificant to cultural outsiders until you realize the depravity to which Chinese football fans will use to insult opposing teams. It should also be noted that Dabao isn’t the equivalent to Maybelline or Max Factor, but serves the less-glamorous demographic of middle-aged women. Dabao products aren’t as much lip gloss or eyeshadow as they are anti-wrinkle creams.

Dabao can also take on a different meaning. As many Chinese call their children the “family treasure”, “Dabao” can be construed to mean “big baby”.

Here’s a short sample of what people had to say about the new name, “Evergrande Taobao”:

爱你犹如爱呼吸：
Feel as though the people running around on the pitch will be the (Taobao) delivery service [bored.emo]

Well, at least in this way, the feminization of the French word “Grande” in “Evergrande” now finally makes sense.

*Quick Chinese explanation: long names are often abbreviated in Chinese into something more manageable. For example, “Beijing University” becomes “Beida” from taking the first character of each character pair (北京大学, Běijīng Dàxué) and make them form their own pairing regardless of meaning (北大, Běidà).

In this case, the new formation does have a literal meaning (ie “North Big”) but its nonsensical meaning is overridden by its use as an abbreviation.

Like any other long name, Evergrande Taobao (恒大淘宝, Héngdà Táobǎo) can be abbreviated, but it’s what happens when the second half of the character gets paired up to become 大宝 (Dàbǎo), or literally, “great treasure” that has gotten netizens so furious. 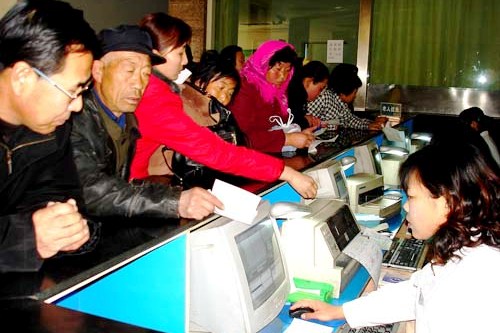 E-commerce giant Alibaba seeks to make massive improvements to China’s antiquated hospital system by reducing wait times for patients through the use of online payments and sharing of patient data.

Alibaba has initiated a pilot program called “Future Hospital” at the Guangzhou Women and Children’s Medical Center, the first such place in China that allows patients to pay for medical services through online accounts, reports China Daily.

By paying fees with a smartphone, Alibaba claims the length of an entire procedure can be reduced from five hours at peak times to one. On its first day of implementation, 580 people used the service at Future Hospital.

However, this is just the beginning of Alibaba’s ambition to reform hospital service in China as the e-commerce giant hopes to “use Alipay’s payment, user data, and big data capabilities to build a comprehensive mobile medical care and health management platform,” reports Tech President.

Zhang Jiangang, an exec at Alifinance, mentioned that in the next 5-10 years, in order to implement phase two of the said plan, Alipay will establish a comprehensive online platform to allow virtually mobile prescription, medicine delivery, hospital transfer, medical care insurance reimbursement, commercial insurance as well as damage claims, as part of the improvement of healthcare reform in China…
“This is a long term plan to realize the shift from cure to prevention,” Zhang said.

Alibaba-owned Taobao had previously attempted to offer a free hospital appointment-booking service in several Chinese provinces only to be blocked in Beijing, where a competing service is offered by the Beijing Health Department.

Alibaba recently purchased a 50% share in the Guangzhou Evergrande football team, the other of Alibaba founder Jack Ma’s projects:

Guangzhou Evergrande, one of China’s winningest football teams, has had a 50% stake in the club purchased by China’s largest e-commerce company, Alibaba, for a reported RMB 1.2 billion, reports the BBC.

It looks like the local sports team will be undergoing yet another name change. But as we contemplate whether this will be the largest payment ever on Alipay.com, we’re left with Alibaba founder Jack Ma’s words at a June 5 press conference:

The mind boggles at the implications of the many new brand and product possibilities under the Alibaba corporate umbrella. Guangzhou football video games as Alibaba mobile apps? Being able to vote off deadwood on the Guangzhou football team using Alipay?

With the sad state of Chinese football and the sensational headlines it always garners, we can only hope that “health and entertainment” are also future strategies for the Guangzhou football team as well.